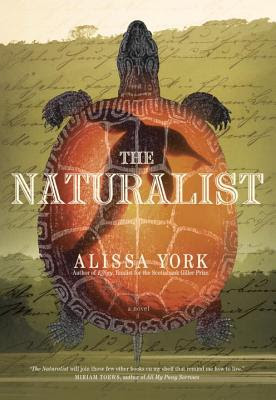 The appeal of Alissa York's writing for me is rooted in her ability to evoke a setting, to describe flora and fauna so that you can feel it in all your senses, whether that's in urban Toronto, as in her last book Fauna, or in this book in which she takes us to the shores of the Amazon in 1867 with a naturalist expedition.

There are rivers, jungles that close around you, spiny fish that can injure, birdsound, heat, sun, stars, breezes over a hammock, and a night darkness so profound you can see nothing at all. And that's just a start.

Opening in Philadelphia, the book introduces us to naturalist Walter Ash, and his new wife Iris. They are planning to travel back to the Amazon on a journey to gather specimens for their dream of a exhibit back home. York really draws out the fact that most of these 19th century naturalists were specimen collectors, killing many animals rather than being conservation minded. It is quite horrifying at times!

Fate intervenes, however, and it turns out that Walter's son Paul must leave his museum job to accompany Iris and her companion, a young Quaker woman, Rachel, in the expedition which Iris is determined to carry out.

It's particularly difficult for Paul, as he was brought back to Philadelphia as a young boy by his father when his mother died -- and her family is still waiting for him to return. They welcome him immediately, but he must struggle with his memories and his long-buried resentments at his father, as he dreams in the presence of his aunt and niece & nephew.

Iris, an artist, spends her time drawing specimens but seems essentially unaffected by her new and wondrous surroundings. Rachel, on the other hand, takes to it immediately. She opens up and is truly present in what they are doing, in where they are located. She's fascinated by the landscape, the animal life, and the people she meets. She and Paul have a bit of a connection, but it's not a mawkish, romantic one -- she has her own journey to take.

The characters are interesting in this novel, but the real focus in on the sciencey bits. The information on the habits and practices of scientific collectors in this era, the descriptions of the wildlife, the Latin names, and so on, are really important to this book. If you like this kind of thing you'll find this novel a great reading experience. If you need something fast-moving with lots of character drama, this probably won't be so engaging. I personally love it, and found this book a good read, although I do think her last book, Fauna, felt more organic and a little bit more accessible with its contemporary urban setting.

But if you like historical novels that are a bit dreamy, very sensory and full of science, I recommend this one.

Andrea Barrett's Voyage of the Narwhal follows another 19th C. expedition, but this time to the other ends of the earth -- to the Arctic. It has the same historical document feel in its style, though, and also relies heavily on beautiful writing and lots of scientific content. There are women featured in the storyline, and homebase is in Philadelphia too!