One or the Other by McFetridge 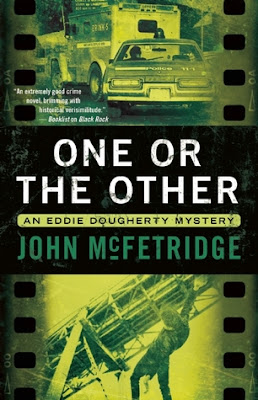 I love this series by John McFetridge, featuring Eddie Dougherty. Eddie is a great character, changing and growing from the first book to this one, in which he is about to (maybe) get a promotion and (most likely) settle down with his girlfriend whom we met in book two.

The setting of these books -- Montreal in the 70s -- is fantastic.  I really enjoy his descriptions of downtown and many of the outlying areas, such as the South Shore neighbourhood where Eddie's parents live, for example. The physical setting is a big part of these books and really makes them redolent of this particular place and time. This one takes place leading up to the 1976 Olympics, and the Games, as well as the extensive police presence there, do play a part and also allow commentary on more social issues.

In this novel, Eddie faces a terrible case; two teens were murdered on the Jacques Cartier bridge and then thrown over into the river. (Horrifyingly, in the author notes, he states that this is loosely based on a real case). The case has gone cool, let's say -- not exactly cold, but not a big priority. It's assumed it was suicide. But Eddie's instincts tell him it wasn't. (spoiler alert: Eddie is right).

Eddie is dealing with a lot. He's desperate for a promotion to Detective but he's starting to think that's it's not going to happen. Office politics, French/English tensions, and a new cop on the team who's a bit of a flashy player make him think that that route is slowly closing for him. He begins to think about working as a desk cop for the remainder of his career, and is slowly coming to terms with the idea.

Meanwhile, his girlfriend is ready to find herself a steady job as a teacher, which means more changes for them. Eddie is maturing, and thinking about settling down, both into his career and into his relationship. This is reflected and contrasted with both his parents' relationship, and hers. The family dynamics between parents, partners, and siblings are a strong thread in the story, and are really integral to understanding Eddie and his police work.

He also has to learn to work with a female detective from another French police department on the South Shore. She faces many of the same work issues as he does, so they unexpectedly bond and work very well together tracking down the facts of this case, even after being warned off it a bit. Their process was really interesting, and added a new aspect to Eddie's character.

I thought this was a more slowly paced, character driven story than some other mysteries. However, the crime itself is well plotted and really quite heart-wrenching at times. I like the characters and the setting is so convincingly drawn. Montreal really shines in this series. I recommend it.

Another Montreal series that uses the city as almost a character is John Farrow's Emile Cinq-Mars series, though it's a bit grittier. It is heavily dependent on the main character, an old-fashioned cop, to drive the story as well.