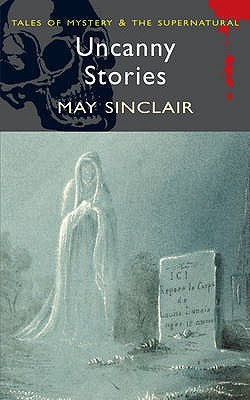 This collection of 8 stories by one of England's best known female writers pre-Virginia Woolf was ... interesting. The stories are all spooky, dealing with the psychic, spiritual, and Freudian-influenced world.

They are uncanny, weird in the traditional sense. None are terrifying or creepy, so to speak, but they do delve into repressed feelings, psychic connections, and the endlessness of the afterlife.

Some stories are stronger than others, as usual in any collection. I liked "The Intercessor", a fairly straightforward story of a haunting, and a man who is unwittingly pulled into the troubled family which both caused and is suffering the effects of the lonely child ghost that he can sense, and is yet unafraid of. I felt that this was the most 'spooky' story in the lot, but was also quite tender.

"The Token", about a man whose wife returns from the grave to determine whether he ever loved her, and "The Victim", in which a jealous man who works as a chauffeur for a country squire murders him grotesquely, are both strong as well. They are brief and have no extraneous existential or philosophical angst to detract from the storyline.

A few of the others, notably "The Finding of the Absolute" and "The Flaw in the Crystal" are much more arcane and intellectual, which also makes them a little dull and theoretical rather than robustly human.

As a whole, though, Sinclair's stories are fascinating for their early feminism and modernist approach to the Uncanny. She is frank about sexuality and Freudian motivators for crimes and/or hauntings; she places women at the centre of many of her stories. I found the introduction, by Paul March-Russell, illuminating in its explanation of Sinclair's involvement in the Modernist movement and her impetus to write -- she was left to support her mother and six brothers after her father drank himself to death (this sounds like a fairy-tale trope to me!). She published over 40 books -- novels, stories, essays, book reviews (including one in which she invented the literary term "stream of consciousness")

I always leave introductions and forewords til last, after I've read a book on its own merits, and in this case, I strongly recommend doing so, as the introduction does delve into the details of the stories. So if you don't like spoilers, especially with stories like this, read them for yourself first, then turn to the intro for some commentary and context.

If you like classic spooky tales told from a woman's perspective, you might like any of the other collections by women in this Wordsworth series, Tales of Mystery & the Supernatural, like Edith Nesbit, Elizabeth Gaskell, Edith Wharton, Gertrude Atherton, Vernon Lee, and more.