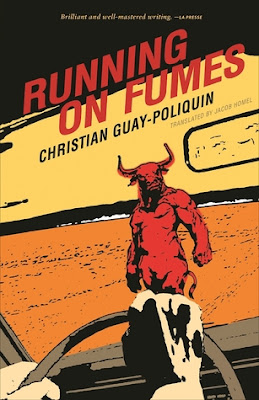 The electricity goes off one day, giving our narrator an early release from his job as a mechanic in a nameless but obvious Fort MacMurray setting. But, it doesn't come back on. After a build up of some panic and unrest, our nameless mechanic jumps in his car, feeling driven to reconnect with his estranged father, back in Quebec.

And thus begins his journey of 4,736 kilometres, the return of the prodigal son, anxious to get to his father before the unexplained power failure and/or his father's dementia prevent him from gaining some closure in their relationship.

His anxiety about his father, and the growing panic on the roads -- lack of gas, looting, people forming tribal groups & suspicious of outsiders, just to name a few -- force him to keep driving, with as little sleep as he can manage. Eventually picking up a female hitchhiker, and then another passenger, his route is delayed and rerouted more than he'd planned. This road trip felt like one of those awful nightmares when you're running and running and not getting anywhere.

The metaphor of a labyrinth, with its minotaur at the centre waiting for him, is brought up a few times, suggesting that the engine of the car echoes the sound of the hooves of the minotaur tracking down the hero. Unfortunately, I didn't think that the metaphor was all that strong; it felt forced, and not fully applicable.

And there were other things that kept me from enjoying this book as much as I wanted to: the action was limited to the main character's experience, and most of that was driving a car. It unfortunately dragged at times much like a lengthy road trip can in reality. His passengers were odd, and I had my suspicions about them from the first; the explanation for them once he reached Quebec was unsatisfactory. And the conclusion of the story -- argh! It was unnecessary melodrama that robbed the story of any meaning, for me; it took away the goal and the purpose of the entire premise which drove the book. And it felt too faux ironic, too much of a writer's hand moving the pieces than an organic conclusion.

Another issue I have is with the translation itself; Homel explains in a translator's afterword that he changed the novel from present-tense, as-it-happens narration (which he says is a common French style) into a past tense English version - which he also says is a more traditional way of telling these kinds of stories in English. But I don't want a revised English edition, I want the French text told in the way the author intended. And I don't agree with the idea that the original French style is unusual; I've read many contemporary novels in English which use the same style. Personally, I like a more direct translation. I suppose it's another reason to brush up my French so that I can read literary novels in the original...a long-term goal, perhaps.

It sounds like I hated this book -- I didn't. I'd give it 3 of 5 stars; there were interesting ideas in it, and some good descriptive passages - it covers a lot of ground, quite literally. But these elements that I've mentioned really did lessen my enjoyment of it, and so my overall impression was just, well, meh.

While Homel mentions many manly road novels in his translator's note, I feel he missed out on one of the best apocalyptic travel novels of the recent past, Station Eleven. Unlike this novel, the characters in Station Eleven are not loners; they band together and work communally to survive. And so they do.

Marcel Theroux' Far North also gives me the same sense as this novel. It has a narrator alone in an apocalyptic future, making a living from the scraps of human existence, facing an undetermined breakdown of society. And then he goes on the road to find others. I found it more complex and satisfying than Running on Fumes, with a less claustrophobic narrative.
Posted by Melwyk at 9/16/2016 11:00:00 am