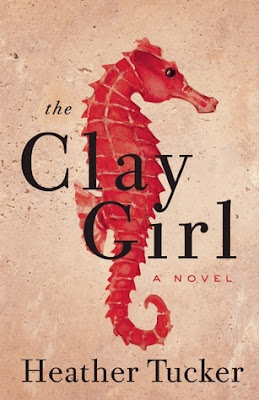 First things first: this cover is gorgeous. So simple and stark and perfect.

Second things: I wanted the book to be gorgeous as well. Sadly, it's not quite what I'd hoped.

Ari Appleton is the youngest of a family of girls, all with "J" names until they get to her, inexplicably named Harriet. She carries her imaginary best friend, a seahorse named Jasper, in her pocket everywhere she goes.

And she needs a sensible seahorse to tell her what's what after her childhood. Something terrible has happened to her sisters, and their father has died. But their sad and incompetent mother is no use, and so the girls are farmed out to relatives.

Harriet, age 8, is sent alone by train all the way out to Halifax to live with her Aunt Mary, considered an outcast for her decision to live with her potter girlfriend Nia. Harriet finds love in this new home, and a new name as they call her Ari, lion-heart.

But of course all does not go well; she is called back to Toronto to live with her mother, who has found herself a new husband, a gentle man whom Ari considers a father. Sadly, that also ends badly, and Ari's mother moves on to a nasty, brutish, and cartoonish villain, a corrupt policeman who is physically violent to his own sons, to Ari, and to her mother. Ari holds out for her 16th birthday when she will be free to leave and live on her own, aiming to return to her aunts on the East Coast. But -- you know that won't go well either; at the point of her own freedom and her chance to live with her aunts and her true love on the ocean shore, she martyrs herself to others, giving up her freedom now for a shot in the future.

This is all happening in the 60s, which I was reminded of now and again when a detail was thrown in to prove it. The feel of the setting and the way the characters interacted and spoke did not feel like it was set anywhere in the past, so I didn't think that aspect was necessary -- if it was so easy to forget that it was supposed to be the 60s, then why bother trying to remind a reader?

And the clear division between "goodies" and "baddies" in this story was a bit harsh. The good ones, Ari's supporters, are all liberal and artsy and kind and intelligent; they all treat her with respect and talk to her in high-minded language even when she's a precocious child (who is rather annoying actually - I was glad when the baby talk stopped). The conversations she holds with her aunts, her teacher/mentor, her one true love... they are all very stagey and not very real-life-like. Every word considered and well placed. No boring small talk there.

I wanted to like this book a lot - and I did read it all in one go, so it was certainly interesting enough to hold me. But there was all the bad news piling on, though, and so this really felt to me like an after-school special, if they made those as a miniseries. Redemption comes through giving oneself over to others, to stoically persevering through terrible behaviour. I'm afraid I couldn't agree.

I can see that many people would love this character and her trials and tribulations, but I found it just a little too idealistic for me, shading over into sentimentality more than I personally prefer. I like the Canadian setting, and the idyllic East Coast summers compared to Ari's nasty city life reminded me a little of LM Montgomery's Jane of Lantern Hill, though the content is vastly different. Jane's grandmother isn't a patch on Ari's awful stepfather.

I thought this was a good enough read to finish it, though it was also problematic in many ways. The plot threw the characters around, rather than the characters determining the story. It was simultaneously bleak and depressing, and hopeful in an Oprah-ish way.

Church of the Dog by Kaya McLaren  for its style and the reliance on mannered language and high-minded though eccentric characters -- and for the presence of a character who needs to be 'saved' by our important main character.

Dean Koontz' Odd Thomas books despite the difference in genre because of :
Ari's sense of purpose; her uncanny way of being the centre of all the action; her sense of being the person, the only and essential one, who needs (or is able) to fix things despite any danger to herself -- this reminds me of Odd Thomas himself, that and his narrative voice is similar to some of the dialogue in this book.