Time of the Doves 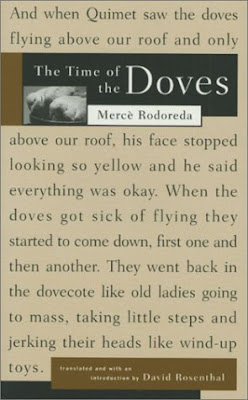 How many books translated from Catalan have you read? Yeah, me either!  My husband recommended this one to me, pulling it off our shelves and handing it over. So of course I started it...and was immediately hooked. I was lucky to have this edition handy, as I later discovered that this poet's translation is considered the most effective and true to the original.

The novel is set around the years of the Spanish Civil War, after which Catalan was banned and the people who spoke it suffered greatly. But the war doesn't appear in person, so to speak -- we see its effects only through Natalia's words. Only through the death of most of the men she knows, including her husband Quimet.

Her husband who was abusive and controlling from the day they met, physically and emotionally, even changing her name to Colometa (little dove) instead of using her actual name.

The book is written in long, sometimes repetitive run-on sentences, reflecting Natalia's constantly fretting state of mind. The book is a cumulative recounting of many small things that press down on her in a repressive, overwhelming way. From her youth, living on her own after she's lost her mother, to throwing over her sedate fiance for the overpowering Quimet (who she nevertheless early on recognizes as having 'monkey eyes'), to difficult children, the excessive care she provides to her family and the growing number of stinking doves that Quiment insists on raising... well, it's all exhausting.

Then the war intervenes. Quimet and his close friends head off to war, and eventually Natalia hears that they are not coming back. Natalia's experience of post-war life is terrible; she can't feed her children and decides to end it all. Timely intervention averts that, but her future, even while it looks more secure, does not bring her peace. She is suffering from what we might now identify as PTSD, and has all sorts of phobias and fears.

Until one day she retraces her steps back to the location of her trauma, the home she shared with Quimet near La Placa del Diamant. There, she says:


“I covered my face with my arms to protect myself from I don’t know what and I let out a hellish scream. A scream I must have been carrying around inside me for many years, so thick it was hard for it to get through my throat, and with that scream a little bit of nothing trickled out of my mouth, like a cockroach made of spit…and that bit of nothing that had lived so long trapped inside me was my youth and it flew off with a scream of I don’t know what…letting go?”


This seems to release her from the fetters of the past, and she is able to return home and appreciate life in the moment -- able to see her new husband for who he is and express her affection, able to recognize where she is now in life. This is a plain narrative voice, written in a mesmerizing style, covering issues of trauma both personal and national. It's one of those books that you won't want to put down, and that you won't soon forget.

To learn more about Mercè Rodoreda and about Catalan writing in general, check out the lengthy #WITMonth review of Rodoreda's Death in Spring at Tony's Reading List, which also includes links to other books by Catalan writers.