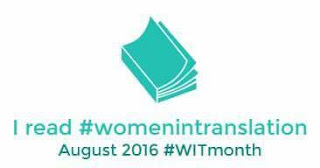 Over at Biblibio, host of this wonderful Women in Translation month, she's just shared 7 of her favourite WIT reads -- as suggested by another reader, Jacqui at JacquiWine's Journal.

I think this is a great idea! So I'm sharing mine here -- some favourites, not favourites-of-all-time, that is too hard to whittle down. Share yours too if you would like!