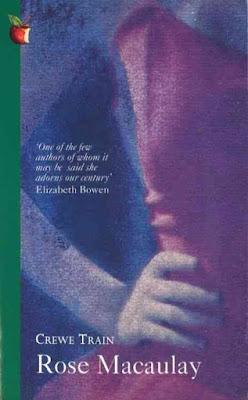 This odd little book has been waiting for me on my shelves for a long time. It's the tale of Denham Dobie, who is plucked from her backwater life in a little village in Andorra when her father dies, and moved to London to live with her deceased mother's family.

It's a story of opposites, and how Denham finds all the habits of civilized, literary London pretty much incomprehensible. Why? she asks again and again, why do this and not that? Why can't people just stop talking and leave one another alone? All this fuss about the smallest things -- for example:

With these Greshams life was like walking on a tight-rope. The things you mustn’t do, mustn’t wear. You must, for instance, spend a great deal of money on silk stockings, when, for much less, you could have got artificial silk or Lisle thread. Why?  Did not these meaner fabrics equally clothe the leg? Why had people agreed that one material was the right wear and that others did not do? Why did not anything do?

Denham is a physical creature; she loves hiking and sailing and maps, secret places, games, and eating. And doing all of it without taking much trouble about it. Unfortunately for her, this is just not the way things are done in London, and the ceaseless talking and reading and social expectations wear on her.

But just like her father before her, even in her quest for freedom, she is drawn back into human connection through physical desire, or perhaps let's call it love. Denham meets one of the young men in her uncle's publishing house, and they fall in love and marry. Two more different people can not be imagined. Arnold believes that Denham is natural and unspoiled; Denham thinks that Arnold makes a wonderful playfellow but she is tired of the need to socialize for the sake of his career.

She leaves Arnold in London for an extended stay in a ramshackle Cornish cottage they've bought, cycling around the countryside, sailing, and generally rusticating. It seems like their marriage is on the rocks, and it certainly isn't helped by all the gossiping and talk going on about them in their literary social circles. Denham has an absolute disgust for the gossip of others, and to find herself the topic is annoying. But she can't even get annoyed enough by that feeling to confront the gossipers.

And of course, there were some bits in which racism rears its ugly head. I think that this is often to be found in books from earlier eras, but it doesn't make it a pleasant read.

And that is the main reason that I didn't fall in love with this book. It's clever, and has a satirical edge, with some funny commentary on literary London. However, Denham's position is not exactly an appealing alternative. She is selfish, lazy, self-centred, anti-intellectual, slovenly, and to me, quite dull.  If she had held out some alternative for a meaningful way to interact that differed from Arnold's world, I may have been more intrigued. As it is, I found Macaulay's writing fluid and excellent, but the relentless mockery of books and literature and talkative people, from the perspective of someone who is just as easily satirized and stereotypical, was a bit much; it just kept on and on. The middle of the story was a bit draggy and I did feel like Macaulay was forcing the point home just a little too much.

The ending is the most interesting bit; Denham returns home to Arnold, having found that she's pregnant. His mother is helping them set up their new home, and starts talking of useful days full of scheduled housewifely duties. The final line is ambiguous as to whether the pull of love and human connection will be enough to keep Denham from kicking over the traces once again. She is certainly one of the most unusual heroines I have come across in recent reads.

Macaulay's writing is sly and clever, though, and generally entertaining. Her thoughts on Christmas in London are still quite recognizable today (especially so close to the holiday):

Every year, in the deep mid-winter, there descends upon this world a terrible fortnight. A fortnight, or ten days, or a week, when citizens can not get about the streets of their cities for the surging pressure of persons who walk therein; when every shop is a choked mass of humanity, and purchases, at the very time when purchases are most numerously ordained to be made, are only possible at the cost of bitter hours of travail; a time when nerves are jangled and frayed, purses emptied to no purpose, all amusements and all occupations suspended in favour of frightful businesses with brown paper, string, letters, cards, stamps, and crammed post offices. This period is doubtless a foretaste of whatever purgatory lies in store for human creatures.

But it is only the naturally idle who find Christmas terrible. The active and industrious enjoy scrambling about streets and shops and doing up parcels and waiting in post offices and giving pleasure by their gifts. They are exhilarated by the bustle and the scrum, and by the thought of the Little Children's Joy. They find Christmas a season of cheer and goodwill, and welcome it each year with a brave and generous smile.