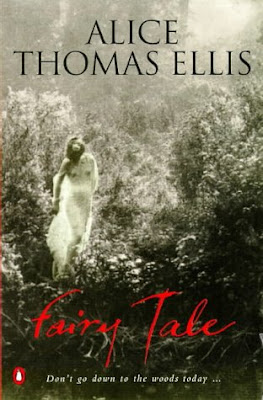 I loved this book.

Eloise, the dippy main character, sitting under trees in the Welsh countryside and sewing nightgowns, wishing for a baby.

Clare, the impatient urban mother and Miriam, Eloise's sharp-eyed godmother, both come to visit, when a grandchild suddenly appears.

Simon, the hapless father, toiling all day without understanding how very out of place he is in this little red house of women.

And the fey. The deceptively mild, business-like Watchers who expect an awful lot from these humans, including getting their baby back.

This book is weird, in the true sense, with an uncanny setting, including the above-mentioned Watchers. There is spookiness, with a creepy changeling (one which only Miriam -and the cat - seems to be able to see through). Eloise is being drawn into the fey world, losing time and unable to recall what she was doing when she returns dry as a bone from a rainy walk in the forest. Or returning from the woods with a new baby...

Ellis uses fairy tale elements; Eloise wishes heartily for a baby, she pricks her finger on her sewing and a drop of blood falls onto the white linen, and four men appear in the yard. There are mysterious tales about the queens who lived in the red cottage where these hapless English people now find themselves. And the need for a blood sacrifice is strong - but thank goodness for a ridiculously funny scene in which the fey are covered in confusion.

The reason this story works is because of Ellis' biting wit. She skewers Eloise's belief in the goodness of nature and the old gods, fed to her by her New Age acquaintance Moonbird. And yet she seems to mock her own interpretation of these old gods as dangerous and amoral, as well. There is so much dark humour and sarcasm in this story -- perhaps that's why I loved it.

It can't really be summarized or it will ruin the reading for others. The writing is crisp and pared down, no padding here. There are witty asides, quotable bits, and clever women -- especially Miriam, whom I adored. Eloise's problems are resolved not by her fairy godmother, but her very down-to-earth, real-life godmother, who takes on the fairies all on her own.

There are clever lines, like this one, describing the way country life begins to affect Clare and Miriam -- “The days went by like carelessly turned pages, so that she seemed to have missed whole passages, and sometimes felt that she must have turned two pages without noticing.” And many more that I could share, but, well, you should just pick this one up yourself!

It's an entertaining read, with many dark elements that somehow feel matter of fact in context. The only stumble for me was the final pages; the ending was not quite right for my tastes. It feels very much like a book of its time. But it was an enjoyable discovery, one just perfect for the dark and windy nights at this time of year.

For more on women and their interplay with self-focused fey, try Susanna Clarke's The Ladies of Grace Adieu. These short stories show women who find power in magic, and outwit the fey at their own game. More straightforward fantasy than Ellis' Fairy Tale, they still hold the same Englishness and quiet wit in the telling.

Penelope Lively is another choice if what you are interested in is the interplay between mothers and daughters, and concise social commentary within fictional tales. Lively also writes brief, considered prose and includes reflections on how the distant past affects the present, whether supernaturally or not.
Posted by Melwyk at 10/26/2015 10:58:00 pm