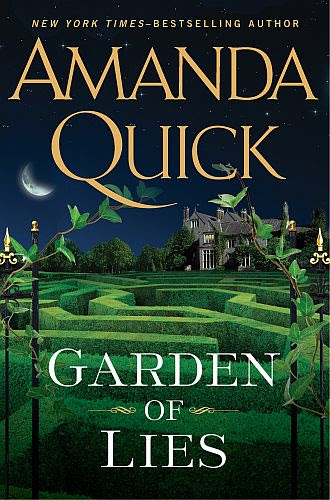 I was under the weather this week, so it was perfect timing getting my hands on the latest Amanda Quick novel. These are my favoured go-to reads when I need to simply read something light and entertaining. I love her books -- under this name as well as those under Jayne Ann Krentz and Jayne Castle -- though I think the Regency/Victorian Quick books are my favourites.

In her last few books I found she was getting a bit too dependent on her long-running Arcane Society theme, and the stories were starting to sound 'samey'. Thankfully in this one she's back on form, and the story is fresh and funny.

Ursula Kern owns a secretarial agency in Victorian London. One of the women in her employ dies; Ursula is convinced it was murder. So she resigns from her current client, former archaeologist Slater Roxton, in order to investigate. Slater, however, is not about to let her disappear from his sight, and so joins her in her investigations (along with his requisite household staff of endearing oddballs). Sparks are flying every which way in this story, and this pairing seems well-matched. Ursula is independent and a bit of a smart-ass; Slater is strong and silent, with a troubled back story and a sensitive side.

There are lots of fun bits riffing on the Victorian crazes for botany and archaeological expeditions, not to mention new inventions like the typewriter. This follows Quick's general formula, one that succeeds for her every time, if the New York Times Bestseller list is to be believed. This was an enjoyable addition to her ever-growing list, and I think that the Kern Secretarial Agency could probably shoulder one or two more books.

This story has mysterious drugs, brothels, spurned wives, evil American assassins, lost civilizations, aged fallen actresses, blackmail, scandal....and a main character who uses the labyrinth as a meditative tool. Really! I couldn't believe it. If you've read my blog for any length of time, you may know that I teach and use the labyrinth, and to see it here both as a metaphor and an actuality was pretty neat.

Slater has an old Roman tile labyrinth in the basement of his London home, and early in the book he wakens from a nightmare, and heads to the labyrinth for answers:


He knew that the dream was his mind's way of telling him that he needed to rethink some of his logic.
He needed to walk the labyrinth...

...the tile path formed an intricate, convoluted pattern that eventually led to the center. Some would have said that it looked like a maze. But a maze, with its many pathways that ended in dead ends, was designed as a puzzle, created to confuse and bewilder. His labyrinth had only a single entrance and one true path the eventually brought the seeker to the center of the complicated design.

The very act of walking the labyrinth was a form of meditation requiring concentration and focus. The exercise helped him to see patterns hidden in chaos...
Time did not matter when he walked the labyrinth. If he tried to hurry the meditative process he would not see the pattern. It was only when he ceased to care about finding the answer that it would come to him.


In sum, I really enjoyed this read and thought it was a strong, creative, fun story. If you're already a fan of hers or if you like modern sensibilities in a story that is both set in the past and told with humour, you may find this romantic romp enjoyable too.

For another tale using gardens and botany as a major theme, you could try Barbara Michaels' The Dancing Floor. While it is less snappy and more of a traditional supernaturally inflected, faux-gothic romantic suspense story (and has a lot less frank sexual content) it still has the same appeal of setting and of a strong romantic connection between the lead characters.

And if what you are looking for next is simply a story of witty characters, an archaeological element, and a growing relationship between two supremely self-confident and pleasantly obnoxious lead characters, you can't go wrong with the first book in the Amelia Peabody series, Crocodile on the Sandbank, which, of all the lengthy series, is the most like a romance novel.