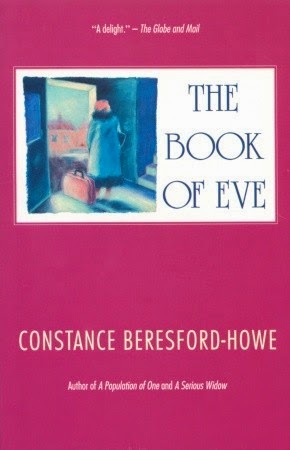 This is an interesting Canadian classic, of sorts. It's the brief tale of Eva, a 65 year old Montreal woman who has finally had enough of her emotionally stifled (though physically comfortable) life in Westmount, and enough of her demanding husband. So, she simply sets down her things and leaves the house. And does not come back.

She moves into a small apartment in a decidedly non-comfortable neighbourhood in the downtown area of Montreal. It's a basement studio, and she makes it nicer with some fabric, a plant, and eventually a stray cat that she takes in. She also explores her own desires and longings, spending much time dreaming and remembering and trying to decide where she wants to go from this point on.

There are others living in the house that she's ended up in. The owners are upstairs, and above them there are more tenants, including a younger Polish man with whom she has an affair. While the Goodreads summary says this is about a woman who 'finds love', I don't think that her love affair is the point here. She is finding herself; finding her emotional freedom despite the financial difficulties it causes her, despite the loss of any social standing that results, despite the distance it causes between her only son and herself.

The only thing that really gave me pause was the way that Eva refers to herself a few times as elderly, as decrepit, and so forth. I felt like she sounded a lot older than the age she was supposed to be -- but perhaps that was self-perception as she struggled not to feel that she'd wasted most of her life already.

Written in the 70's, it really reflects the issues brought up in Betty Friedan's The Feminine Mystique, and many of the concerns of 70's feminism -- the lack of agency women had in their lives, the emotional abuse that was normal for many housewives, the boredom and loss of self that resulted -- but this story is also a very individual one that relies on the character of Eva Carroll and the wonderful Montreal setting to really make it shine. I thought it captured an era really well, and was able to illuminate one small story that opens up into a larger one. It's a moving story of a woman who just has to strike out on her own, and is willing to pay the social and monetary costs to be true to herself.

If you're looking for a similar kind of slower-moving story about the small moments of a woman's life, you could try a variety of Alice Munro's short fiction. While many of her heroines make subtler changes than Eva did, they are all fighting to be true to themselves.

Ethel Wilson's 1954 Swamp Angel follows Maggie Lloyd, a woman who walks out on her difficult second marriage and finds a new life working at a fishing camp in the B.C. interior. While her more remote setting brings different challenges than Eva's very urban Montreal one, both women are striving to find a place where their spirit can be free.
Posted by Melwyk at 3/01/2015 10:34:00 pm