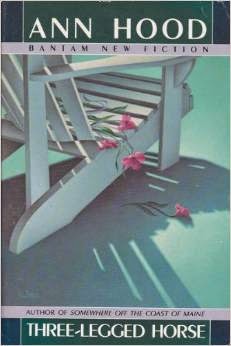 I've owned this novel for years. Really, for YEARS. So I finally picked it up and read it last weekend. It was a book I wanted to love.

I'd discovered Hood with her book Places to Stay the Night, which I'd found randomly on a library shelf years ago. I liked it so ended up reading a few of her books after that, and find her enjoyable and light for the most part.

Three-Legged Horse was an early novel, though, and it does show. It's interesting enough, but ultimately forgettable. Not one of her best.

The plot is a bit creaky: free-spirited mother who is in a folk band (named Three-Legged Horse) but who is involved in a troubled relationship with a distant, artist husband who comes and goes, sometimes for years on end. But she just can't give him up. Daughter Hannah deals with the fall-out of these emotional struggles, and with a father she barely knows. Hannah is trying to find her own way as well, now that she's a teenager, and that is causing some issues of her own. Oh yes, don't forget the glamorous New York soap opera actor Grandmother and her own dysfunctional marriage.

Too many threads trying to be woven in here. It's almost after-school special, but not quite. Hood is a good writer, and although much of the story is predictable in the sense of psychological tropes and easy answers, it still has a spark that makes it readable. It really shows the potential that Hood used to better effect in her following works.

This was a good pick to mix in between some heavier classic reads though. It's modern and it really does show some of the social norms and stock characters of the 80's. I could almost see the pastels and big hair in some of the story elements. Fun reading, but if you want to discover Hood, I'd recommend trying some of her later books first so that you can see her working at a more polished level. Her more recent books are really quite wonderful.

Laura Moriarty's The Centre of Everything focuses on another 12 yr old girl, who faces a life with a mother always on the edge of employment who is having an unsatisfactory affair with a married man. Evelyn's perspective on life and love is formed in this unsettled atmosphere, and like Hannah in Three-Legged Horse, she seems more mature than the adults in the story. However, like any teenager, her tale is told from her viewpoint as the "centre of everything".

Alice Hoffman's Here On Earth tells the story of March Murray, who with her teenage daughter returns to her childhood home. There she comes across her high-school love Hollis...and learns why obsessive love is not always a good thing. (this is inspired by Wuthering Heights, the classic obsession novel)
Posted by Melwyk at 2/09/2015 11:28:00 pm