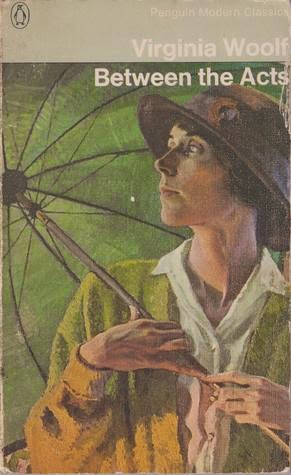 This was another book that I read during last month's Readathon, and one that I've had to think about. Something odd happens when you spend a whole day reading many books -- the unusual, unexpected links appear between them, little things that you wouldn't notice otherwise. For example, in another book that I recently reviewed, One Foolish Heart, the main character Selina is in love with a tall, handsome blond man from the wealthy classes, but ends up marrying a stolid, dark regular kind of man. In Between the Acts, Isa is married to a wealthy, handsome blond man, and yet has a covert passion for the dark, stolid gentleman farmer down the road.

Isa Oliver is the wife of the local gentleman, Giles Oliver, and as such, is responsible for overseeing the community fete and pageant that is being held on their grounds that afternoon and evening. Woolf begins the story with the family and visitors to Pointz Hill, looking at their various relationships and behaviours. The delicate lines of expectation and resentment, of proper social behaviour as opposed to the internal desire to do something else, are all drawn just as delicately as you'd expect. Isa is the centre; all the others are connected to her in some way, and we see the faint lines of connection tugged at and shaken throughout the story.

But Woolf quickly moves into the day of the pageant. And to do so, she intersperses the original characters and their concerns with long descriptive passages, detailing the pageant as it is being acted out -- the other characters serve as audience. And this pageant is a long, long one; it aims to cover the history of England, using numerous villagers to act it out. Using this structure really brings into focus the interplay of history, culture and identity; how much does our emotional or physical reaction to events shape history, or shape ourselves, for example. It feels as if the circular structure of one act after another, and the interplay of audience between the acts, sets up echoes of meaning. And is it the large, "pageant-able" moments that make up a life of meaning, or those that come 'between the acts'?

Woolf's characters, besides those of the Olivers, are also intriguing. The pageant's director, Miss LaTrobe, is a highly keyed up woman who is trying to control and manipulate her audience's response to the various set pieces -- the key is to bring them to a certain level of appreciation so that all her efforts will be truly understood, so that the audience "gets it". To me, this rather brusque, solitary woman in charge of the entire artistic effort felt like a strong metaphor for Woolf herself (or at least, for Woolf as writer). Her focus was to finely tune all of her work, to resonate with the emotions and senses of the reader, and as we know this doesn't work with all readers.

But I found lots in it to admire, to reread and to enjoy. Woolf's focus on the interior, sense experience is still strong in this novel, even though it feels different from her other work. Her conceit, of an internal audience who is receiving and interpreting the pageant, highlights how we as the reading audience are perceiving the book as a whole. She is able to colour, to influence, our own reading of this particular book.

However, I did find that the sections that are simply pageant begin to drag on a little. They are very detailed and specific -- interesting but there are a lot of them! In an introductory note to this novel, Leonard Woolf explains that this is one of Virginia's drafts, not a final project, but the last one before she died. It seems likely she would have still polished this one up just a bit more if she could have.

Anyhow, despite any reservations, this is still a valuable book to encounter, and it is well worth reading. The images, the sensations, the specificity of the language, all make this a joy to slowly read and sink into.

Reading this reminded me strongly of Margaret Atwood. There is some similarity in style when compared with this particular Woolf book. Try Atwood's Penelopiad -- while Woolf allows her rather campy pageant to sprawl out within her framing story, Atwood retells the myth of Odysseus and Penelope, complete with chorus, to us as the audience without a fictional audience as intermediary. It's another brief book with many layers to it.

In the basic setup of the storyline, that of a summer fete occuring at a country house, with various people compelled to help out, who wander to and fro sharing their thoughts during the long day, I was reminded of Aldous Huxley's Crome Yellow. Though Huxley is much more satiric and funny about this situation, there are similarities in the sense of the taken-for-granted expectations of English country landowners at the time, and the general malaise of the country house inhabitants and their visitors.
Posted by Melwyk at 11/08/2014 04:09:00 pm