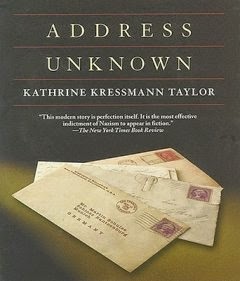 I picked up this book in a recent used book store shopping trip; it was a tiny volume slid onto the shelf and I'm just lucky that this title was one I'd lately put on my "to-read" list, so it caught my eye, squished in there.

It was first published in 1938 as a short story, in Story magazine. It was a huge phenomenon then, and I can see why, even as I read it now. It was sparked by Taylor's curiosity as to the effect that Nazism had on otherwise nice, normal Germans; how did it take hold?

The story is told through the exchange of letters between two business partners, Max Eisenstein and Martin Schulse, who are art dealers in San Francisco. As the story begins, in 1932, Martin has just moved his family back to Germany, where they are very well to do compared with those who've been living in a depressed economy since the end of WWI. At first, Martin mentions some hesitation about this new leader of theirs, Adolf Hitler; although he seems to have a lot of energy Martin hopes that it will lead Germans in the right direction. But his letters quickly change tenor.

His old friend Max, a Jewish American, becomes more and more alarmed at the change. Max also has a sister, Griselle, who is an actress in Europe, and who had a brief romance with the married Martin in the past. Things come to a head when Griselle takes a job in Berlin, against Max's advice, and then one of her letters is returned to him, marked "Address Unknown". In a panic he appeals to Martin to investigate, not being able to believe that Martin has been wholly changed. Things get pretty ugly from there.

Within these 64 pages, Taylor is able to illuminate the atmosphere in a newly Nazi state -- the paranoia, the conformity, the pure hatred and self-interest that prevails. The story is relentless, with Taylor not backing away from the horrific realities of Jewish-German life at this time.

It was a shocking read, a perfectly constructed story, an unblinking condemnation of Nazism, and a must read in every sense of the word. I don't know what I was expecting, but this is a powerful story, one that makes clear how much everyone knew about what was going on in Germany by the early 30's. It's one I can't stop thinking about.
Posted by Melwyk at 8/08/2014 08:09:00 pm