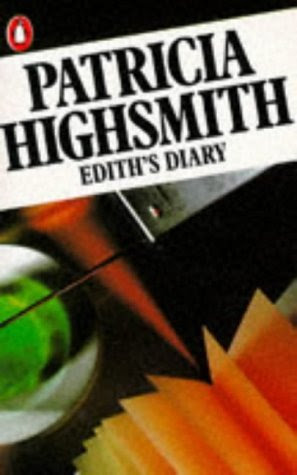 Now here's one book that I read in the midst of my mystery mania that isn't really a mystery. It's a psychological study of one woman, Edith, whose diary reflects a much brighter world than the one she finds herself actually living in.

The concept is great-- I love diary fiction, I love unreliable narrators -- but the execution was mediocre. Edith's diary is incidental to the story, and as Edith writes in it, we see that she is making it all up; the reader is watching Edith imagine things, not wondering if what she's writing is true or not. It's not even clear if Edith really believes what she's writing or if she's simply being ironic (well, until near the end, anyhow, then it becomes clearer what's happening.)

Edith is a wife and mother of one son, a completely useless, obnoxious and creepy boy who grows up throughout the novel, from a 10 year old to an alcoholic adult child still living at home and taking advantage of the situation, even though it's clear that neither of his parents particularly likes him. Edith also ends up being the primary caregiver for her husband's elderly, ill, needy uncle who moves in with them as soon as they buy a house in the country. Meanwhile she is also expected to work as a newspaper writer and be involved in community groups and activities.

Halfway through, Edith's husband leaves her for a successful younger woman, and this throws her right off the rails. The tone, and the impetus for her break from reality, reminds me of another book I read a while ago, One Minus One by Ruth Doan MacDougall, incidentally also from the 70s. And perhaps it's just that off kilter 70s sensibility that I don't like. The woman are psychologically fragile and dependent for their very identity on the men in their lives, a theme that I just can't appreciate. This is actually one in a small series of titles I've just finished that all have women with absent husbands and codependent relationships with their sons as a major element. Maybe just too many all at once...

Plus, this book was simply too fragmented and depressing for me; at least I know now that I don't want to spend any more time in Patricia Highsmith's mind. Loneliness, alienation, addiction, and a really oppressive passivity permeate this novel. Not a read I enjoyed, even while feeling compelled to see it out to its end.