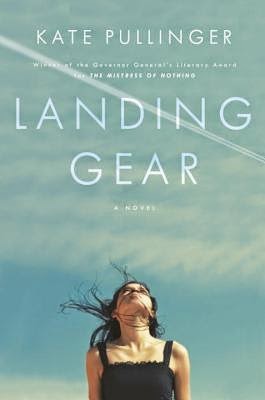 This was an interesting book, with a great concept. It's set in England, Dubai, and partly in Toronto, in the days immediately following the 2010 explosion of the Iceland volcano which stopped all air traffic over Europe.

It began its life as a virtual project called Flight Paths -- it's great to see an author engage digitally in such a fluid way. This book does carry the flavour of those original short, discrete stories, though they do entwine in a deeper, more detailed way in this book, naturally, as it's much longer. I checked out Flight Paths after I'd finished the book, and do recommend doing both. Rather intriguing! Something else to check out is the publisher's map of locations mentioned in the first 30 pages, for each of the characters. Lots of interactive goodness.

Anyhow, as to the plot... we follow three strands that interweave. Harriet, who works in radio in London, finds that there's a career opportunity when many of her colleagues are stranded in Europe due to this crisis. Her husband Michael is stuck in New York, and travels to Toronto to visit an old flame. Their son Jack, left unsupervised, gets himself into fairly major trouble. Then there's Emily, left an orphan in her 20s when her adoptive father dies -- she's now wondering if she should contact her birth mother, whom she's pretty sure is Harriet. Into this mix falls Yacub, a Pakistani migrant worker who has stowed away in the landing gear of an airplane to get to the US, but only makes it to London.

There are a lot of disconnected bits as the story begins, and you have to have the patience to follow each and wait for the links to show up. I found it easy going, as each of the elements interested me, though the teenage boy drama of Jack's storyline was my least favourite. I liked Pullinger's exploration of Harriet's character, her motivations and longings and self-talk as the story progresses. And Yacub was an interesting development; his back story was relentless but he was always looking forward to the next chance, and his sudden appearance shifts Harriet's family around significantly.

I found this book had a very contemporary, fresh feeling about it. Technology is a major player in the story, from airplanes themselves to Emily's interest in video. The relationships range all over the world, and the impression of global connections is strong. I enjoyed it a lot, and liked the spare structure of it. Just like the cessation of air traffic paused the characters' lives, allowing them to notice the stillness and silence for even just a moment, this book woke up my observational skills and helped me notice details of everyday life after I'd finished it. It was an interesting effect!

There are a few flaws; the disconnections and glossing over of details may not be for everyone. It doesn't delve deeply into the inner experiences and feelings of all the characters, rather it tells us what they are feeling and experiencing -- there is a slight remove from the characters' lives. But I liked that distancing; I thought it fit the contemporary style of the story. It really does work as an online experiment though, and I think it's worth looking into both.