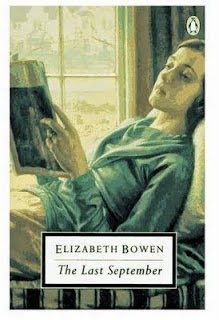 This is another novel of an Anglo-Irish family, but one quite different from my recent read, Molly Keane's The Rising Tide. Bowen pays more attention to the wider political climate, and the clash of British and Anglo-Irish social norms. She is writing a novel of internal change, one that really focuses on Anglo-Irish identity, at the time of the Irish uprising; each of the characters serves as a differing perspective on what is occurring both within their family, and their neighbourhood.

It was quite slow-moving, though, and I had a hard time getting through it. I just kept reading, as I was interested in the Naylors -- our main character Lois, a restless young woman, her cousin Laurence, her older Aunt & Uncle who own the house, and houseguests -- the Montmorencys and the flashier English friend, Marda Norton.  There are a few other characters who come and go, notably English soldier Gerald, a flirtation of Lois'. But they are all very self-contained; even with Bowen's detailed descriptions of their appearance, their motivations and so on, I felt as if I couldn't really puzzle them out. The entire book felt like it was wrapped in cotton wool and I was struggling to hear it clearly.

There were some fascinating social bits: I was surprised to see that expectations for English women were different than those for native Anglo-Irish girls -- and yes, they really were girls. They were expected to remain naive, innocent, pure, and so forth, and protect their reputations rabidly. When Lois starts seeing Gerald, an English soldier, she does it out of restlessness and boredom, but finds that she is nonetheless subject to gossip and rumour. Not only her own social circle, but the insurgent Irish are also aware that she is involved with an English soldier. This is not a good thing.

The book is broken up into three sections: “The Arrival of Mr. and Mrs. Montmorency”, “The Visit of Miss Norton”, and “The Departure of Gerald”. The story centres around the effect that these new individuals have on Lois, and how their actions shape the wider story. Gerald's departure isn't what I expected, and after that moment, the country's hold on Lois seems to dissipate, and for the first time, she takes action and changes the direction of her life. She'd been floating along, waiting, doing what everyone did -- tennis parties, dances, simply waiting -- and in conclusion she and Laurence, as representatives of a younger generation, escape the grasp of the past and move on.

It was quite a subtle ending, at first feeling a bit anticlimactic, but on consideration I think that Lois really had to find her own character in order to take the steps she did. I suppose that was the character growth that seemed stalled throughout the novel, and then suddenly grasped her in the final pages.

This is the second Bowen novel I've read (the other was The House in Paris) and they feel like very different books. I'm not sure I could say that I enjoyed this one, but it was fascinating for its look at the stultifying social expectations of this society. It felt a bit claustrophobic, and I must admit I was glad to come to the end. Somehow I don't think that Bowen will ever be one of my favourite writers; her style doesn't seem to one that I connect with easily. Nonetheless, I'm glad I persevered and finished this book on my second try with it.