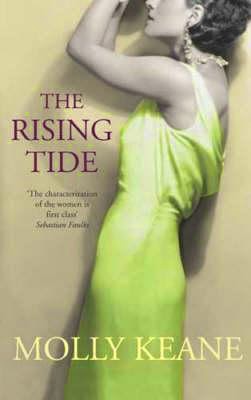 I've had this book near the top of the stack to read for a few months now. It's funny how timing works, as I picked it up last week and began reading, right at the time that I had been mostly reading pattern-making and fashion history books instead of fiction. This shook up my fiction-slump, and it also contained an unusual amount of description of clothing as part of the history of the women of Garonlea. I couldn't help but notice it.

It was a great read -- slightly unusual in style, with jumps in time to cover a few decades that end up being more startling because they are the decades from 1900 to 1930 or so -- with quite a huge shift in social parameters within those few years, as the family moves from the Edwardian Age to the Jazz Age.

The Rising Tide is set in Ireland, among a rich and self-absorbed Anglo-Irish family, the French-McGrath's of Garonlea. Keane is more interested in this family itself, and the power struggles among the women of the family, than in the wider social context. For example, the Irish Troubles are tossed off in a sentence or two about how "houses were being burned", but this unrest never seemed to pierce to the gloomy valley where Garonlea existed.

Keane describes the character of this house as follows:


Garonlea where these McGraths had lived for a long time had its share in the forming and making of that sadness in their natures which so few of the family seemed entirely to escape... What is there that can be told about Garonlea and the evil that can be on a place through want of happiness. Or even of a will towards happiness.  Family tragedy is brief and sudden in comparison to this that lies like the breath of mould in old clothes on the people who live in such a place. It seems as though nothing could ever dissolve such mists and ill vapours, or only for such a little while. So inexact, so dim is such a gloom, it is hard to say whether it is the effect of place on character or character on place. Thus was Garonlea affected beyond its native melancholy by these gloomy McGraths who had lived there such a dreadfully long time.

This sense of melancholy really permeates the entire book, and the sharp edges of many characters are exposed clearly. The matriarch of the clan, Lady Charlotte French-McGrath, dominates her four daughters relentlessly, enjoying her complete power over all of them and over her husband too. Her son Desmond breaks with the complete control she wields over her children when he chooses his own bride-to-be and brings her home to Garonlea for inspection. Cynthia, a matriarch in her own right, comes from a rich, sporting family, and so is judged acceptable, but from the very moment she first sees Garonlea she knows she will have to fight its influence. Her self-absorption and powerful personality clashes with her mother-in-law's until finally there is a breach; but Cynthia rests secure in the fact that her son will inherit Garonlea in time.

All of the characters are drawn as individuals facing emotional crises of some sort. Of the four original sisters, one is married off early out of necessity, one is married off later to a much older man thanks to her exquisite beauty and essential vapidity, one remains a spinster daughter to care for her parents, and the fourth and youngest becomes Cynthia's adoring assistant for the rest of her life. It's rather like a fairy tale in some ways, though a rather Grimm one. Cynthia's own children suffer emotional trauma and grow to be rather prickly adults in their own right. I couldn't warm to Simon, her eldest son -- despite the difficulties he faced, I found that he expressed all the worst characteristics of both his grandmother and of Cynthia. He dominates his sister as well, in a repeated cycle of family behaviour.

The deep need for affection in all these characters, usually thwarted and twisted, causes much of their behaviour, and of course the social setting of a very small, insular Anglo-Irish community makes its own influence felt. The story is told in a rapidly moving style, feeling as if it's being told in the moment -- with a feeling of surprise at the rate of change in something that they all thought would last forever. Cynthia has a fixation on hunting and riding, and can't conceive of anyone wanting anything different. Each day comes and goes without much reflection on the part of any of the characters; they are just hanging on, surviving by doing what's expected.

Near the end of the book, Simon decides that for his coming-of-age birthday, they are going to hold a ball at Garonlea in the old style -- come dressed as your ancestors (grandparents really, but to him it is so distant as to be ancient). The guests join in valiantly, and as people arrive, dressed in clothing of the past generation, the stultifying unhappiness of that generation seems to descend as well. It's quite an extraordinary scene, and clothing plays a huge role in the lead-up to this ball, as well as the experiences of the night itself. Those who wear what is expected, those who are off by a generation, those who lived through it the first time and subvert Simon's expectations -- all these fine shadings of emotional and social success are communicated through their clothing choices.

Cynthia is particularly represented by her clothes; when she arrives at Garonlea for the very first time as a young woman, she is revealed by her clothing.


"Muriel, my dear, you may take Cynthia up to her room." ...
Cynthia, knowing she looked superb in her new green facecloth coat and skirt with a dark flat velvet cap skewered through the pale puffed wings of her hair, agreed and followed the shy eager Muriel upstairs.
...Cynthia changed with speed and total disregard for cold into a mauve chiffon blouse, dislocating herself cleverly to fasten its back buttons and the nine minute hooks that fastened the wire-supported net collar, which finished in a wee Toby frill under her chin. An embroidered yoke and deep soft folds of tulle, long big sleeves gathered in ten different directions and tight on the wrist -- that was how this romantic blouse was made, and worn with a dark purple skirt and bronze kid slippers with bronze bead buckles. Cynthia tucked a bunch of silk violets into her waistband and was ready when Muriel knocked at her door again.

But years later, on the night of Simon's ball, Cynthia declines to return to those years. Instead she comes downstairs in modern evening dress.


She was wearing a black velvet dress of the latest possible mode. It was simple and inevitably clever, flattering her out of two stone of weight and ten years of age. Among all the puffed bosoms and spread hips and frilled shoulders she looked like a very clean, black fish. She looked lovely and clear-lined and active. Beyond any of them she suggested an extremity of luxury and cleanliness. She wore her pearls and diamond bracelets with that sort of bold carelessness that no one could impart to jewels in the days of lockets or in the days of cameos. ...She looked only like herself. Where she was, there was the place to be.

In the preparations for his party, however, Cynthia begins to recognize the fact that she is aging, that her extraordinary power to charm may in fact be in decline. She realizes this through trying on old clothes, which brings her to her decision to overlook Simon's decree for fancy dress. She's not a highly reflective woman, and so for her, her clothing is in fact her material past, and she keeps it all.


In the passage outside Cynthia's room there stood a very long cupboard. Locked in it were all the clothes of half a lifetime, which she had thought when discarded too good to be given away....She had always loved her clothes, buying them with vision and extravagance, wearing them with immoderate success, and cherishing them beyond any useful purpose. Because they had been part of herself, part of her beauty and glamour and powerfulness, there was a lonely and jealous force in her guarding of them. She would have been desperately angry had any attempt been made on that locked wardrobe of ghosts and memories. All the dresses were hers, her very life. Not a vague, general past. They had decorated her, been warm and light, part of her hours of love and dreadful loneliness and quickened content. There were dresses hanging there that she had worn before her wedding-dress which hung still like a Spanish queen's in isolated perfection. Not as much as a knot of orange blossom unpicked to fit it for lesser moments. Inviolate, unaltered it hung, a shapely thing in the darkness, its sleeves puffed still, as by the breath of romance, its sweeping white line a gorgeous full memorial to ripe virginity.
Often during the last two days Cynthia...had looked into this cupboard, comparing, wondering, strangely touched and plucked at by the past which she would deny and ignore and pretend to forget while keeping so many of its ghosts for torment and delight to feed on.

This is a dark story, one of power and unhappiness and the squelching of so many emotional lives. It reveals how awful is was to be an unmarried daughter in the early 1900's and how the reaction to the stuffiness of that generation was also fairly awful. It's very well done, and I was very drawn into the story throughout my reading. The characters are examined as if they're insects pinned to a board; precisely, a bit harshly perhaps, and by appearances as well. Keane has an unforgiving eye and a fluid pen; together they create a story that I couldn't look away from.