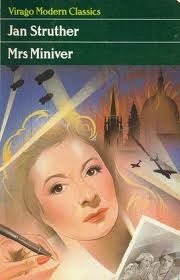 I don't know where February went...days pass in a blur when you're busy, I guess! But I have still been reading, of course. And one book that I whizzed through was the unexpectedly charming Mrs. Miniver.

I've put off reading this for a long time, having some vague idea in my mind (thanks to the Greer Garson film) that it would be overly sentimental and not really my thing. But on the other hand, my copy is a Virago...so I added it to my Century of Books list as a possibility. I'm glad I picked it up because I really enjoyed it! It has similarities to my last Century read, Diary of a Provincial Lady -- though it isn't in diary format, it is told in a series of short 'fictional'essays moving through the year from fall to fall, in the years just preceding the start of WWII. Like the Diary of a Provincial Lady, Mrs. Miniver is fiction, but both books were heavily based on the real lives of their authors. That said, the Minivers are wealthier than the Provincial Lady was!

The Minivers have 3 children, a cook, a housemaid, a country house (also with staff), and lots of time to attend dinners and events. Despite that, Mrs. Miniver knows that she is fortunate, and she appreciates every moment. Her essays are about mundane pleasures such a buying a new day planner for the year ahead (it has to be just right), or having a day in the park en famille, or watching fireworks in the garden. There are comments on the ethics of shooting parties, and a reference to Punch & Judy, both of which made me wince a little, but on the whole, this was a book oozing with charm and interest.

It would be a great read for before bed, or when you just have a moment or two to read a brief, delightful essay. Each one is only a few pages, and Struther generally ends them off with a memorable sentence or two. These were originally newspaper columns, which Struther wrote after she was asked to create an ordinary woman living an ordinary English life. While Mrs. Miniver is a little non-ordinary in terms of her social class, the essays capture the feel of life in London and a little bit of the country, too. There are also serious, pointed comments on the war and its effect on the psyche of the nation, as England made its way into WWII. The blend works very nicely, amusing and edifying at the same time. Well worth reading; much less sentimental than I had believed it to be.

Adding a couple of quotes that seemed quite timely this week:

The first, on something a bit silly --

What a contrast to Agnes Lingfield, whom I ran into in Sloane Street a few days ago. She insisted on taking me into a shop for a cup of coffee... "I haven't seen you since the day we lunched at Teresa's and she put me next to that terrible little Bolshie, whats-his-name"
"Neish," I said.
"Of course -- Nash."
"Neish," I said.
"Leish. Oh well..." (One of my favourite studies is the way people like Agnes always mispronounce the names of anybody they dislike, especially if he or she is out of a lower drawer. It is such a pathetically naive weapon.)

The next, on a rather more serious topic that is extremely relevant right now.

Outside the little newsagent's the evening paper placards were flapping under their wire grids like netted geese. The lower half of one of them had been folded upwards by the wind, hiding everything except the word "JEWS." Mrs. Miniver was conscious of an instantaneous mental wincing, and an almost instantaneous remorse for it. However long the horror continued, one must not get to the stage of refusing to think about it. To shrink from direct pain was bad enough, but to shrink from vicarious pain was the ultimate cowardice. And whereas to conceal direct pain was a virtue, to conceal vicarious pain was a sin. Only by feeling it to the utmost, and by expressing it, could the rest of the world help to heal the injury which had caused it. Money, food, clothing, shelter -- people could give all these and still it would not be enough: it would not absolve them from the duty of paying in full, also, the imponderable tribute of grief.

Christine at The Book Trunk reviewed this one recently, saying that "Mrs Miniver is actually a rather endearing character, and I found her easy to warm to, despite the difference in life-style" Her review reflects just what I think of this book, as well!