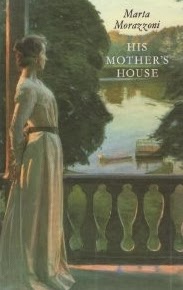 I discovered this small Italian novel set in Norway by chance, in my local used bookstore some time ago. I'm glad I had it to read in the depths of winter, as it takes place during a beautifully described Norwegian summer.

Haakon is a middle aged Norwegian living in Hamburg, who we meet in the first pages of this book as he is readying himself to leave for his annual 4 week vacation. He goes home to his mother's house near Bergen each year, and just like Haakon himself, his mother has a set daily routine. They both know how long he will stay, and what to expect from one another.

This year, however, Haakon finds that his mother has taken a young woman, Felice, under her wing; she's an employee of the local garden centre who has been helping with her new plants. Haakon's mother spends most of her time and emotional energy on her large garden, to the exclusion of Haakon himself. The few tasks that he used to assist her with are now being undertaken by Felice. Not only that, she is also about to move into their gatehouse.

Both his mother and Felice herself assume that he is upset with the way she seems to be taking over his role. Haakon is more awkward than usual, though, because he is somehow very attracted to her, to some energy that she seems to express. Being such a stifled man, he doesn't find a way to make this clear, and their relationship never straightens out; he can not breach the assumptions about his feelings.

Despite his internal struggles, his exterior life continues on just the same. His slightly passive attempt to change his habits comes to naught, and he follows in the same groove that he had set down in past years. Still, one does wonder if this small moment of upset to his routine will change him in larger ways -- I'd like to think he eventually finds more freedom in his life.

This story is brief, and appears simple at first glance. But Haakon's emotional life, both in the current moment, and with memories from childhood, is full of interest. He reveals both  passion and his connection to his home to the reader, if not to the other characters. The beauty of the lake and the mountains surrounding him are clearly described, as he hikes and swims and reflects on it all in his solitude. This holiday is a time out of regular life for Haakon, and it feels a little like a stopped moment for the reader as well, as the days pass in calm, quiet explorations of nature and Haakon's mother's garden. It's melancholy, mysterious with many of Haakon's questions left unanswered, and moving in its depiction of his inner life.

I felt like it ended somewhat abruptly, without a satisfactory conclusion or explanation for Haakon, but I suppose that fits with his character. It was a quiet read, a glimpse into a quiet life, perfect for the patient reader.