Spinner in the Sun 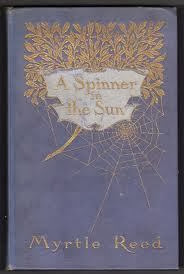 I've read a few of Reed's books before, and enjoy them for their very old-fashioned style. This book continues with her melodramatic, romantic writing and plotting, some of it entertaining, some still controversial, some far too dated to be acceptable.

But I enjoyed this read nevertheless. The plot isn't too convoluted: Evelina Grey returns to her neglected home 25 years after leaving it in a great dramatic moment -- she was rushed to hospital after being burned in an explosion. Still living in the same place is the man who rejected her 25 years before, Doctor Anthony Dexter. His son Ralph has just returned home as well, as a new doctor, to work with his father. Add to this Evelina's old schoolmate, now old maid, Miss Mehitable, the most anti-man spinster you can imagine, and her beautiful, innocent niece Araminta, and you have the field of characters. Into this comes old rambler Tom Barnaby, who keeps a general store of sorts and wanders about in the woods with his dog, playing his flute.

Evelina is a bitter, angry woman, having been crushed by her rejection 25 years earlier. Tom and Miss Mehitable both try to help her in their own ways, one by cleaning out her yard and one by cleaning her house. After 25 years of neglect, there's a lot to be done! Tom, however, also tries to talk her into forgiving the grudge she is holding -- he says:


From the distaff of Eternity, you take the thread of your life, but you're sitting in the night, and God meant you to be a spinner in the sun. When the day breaks for you, you'll be finding the loose link to set yourself free.

After much melodrama, Evelina comes to a place where she can forgive. Dr. Dexter gets his just rewards, and Ralph and Araminta find True Love. The general conclusion is all pretty clear from the start, but the action is rather unexpected in parts. Anthony Dexter really is a nasty character, weak, cruel and doing awful things with animals in his laboratory (still quite horrible to modern readers, and a relevant cause for Reed to bring up, as the American Anti-Vivisection Society was started by two women in 1883 and is still going strong)

His character is redeemed by his son Ralph, an upstanding, honourable young man who is opposed to his father's experiments, and is horrified by his father's "shirking" of responsibilities when it is all discovered. Ralph has a love interest in Araminta, the very naive, child-like 19 year old brought up by her crotchety aunt Mehitable to believe that men are trouble and that marriage is a shame and embarrassment. Minty falls in love with "Doctor Ralph" when he is treating her broken ankle and they eventually live happily ever after. Their relationship is a bit creepy actually, as Minty is drawn as a child, in nearly every way. She has no education, no worldliness, no understanding of men, but is of course, extremely beautiful in the dewy youthful Gibson girl manner. Evelina's eventual choice of partner in her own love match also seemed odd to me.

The humour in the book comes from Miss Mehitable (or Miss Hitty, as she's commonly known). She is sour and anti-male (especially anti Dr. Dexter, which is kind of understandable) but she is also practical and efficient. She comes out with some hilarious statements, and it made me sad that she gave in to the authority of Dr. Ralph, a boy who she used to chase out of her orchards.

In one section, Reed seems to prefigure an ethos that Viktor Frankl shares in his 1946 classic, Man's Search for Meaning, in these words: "Everything can be taken from a man but one thing: the last of the human freedoms—to choose one’s attitude in any given set of circumstances, to choose one’s own way."  Near the end of Evelina's struggles, she thinks this:


Hedged in by the iron bars of circumstance as surely as a bird within his cage, it remains for the individual to choose whether he will beat his wings against the bars until he dies, or take his place serenely on the perch ordained for him -- and sing.

Unfortunately, Reed then goes on at length with the outdated idea that one's place is divinely ordained and to try to struggle to escape it is both fruitless and morally suspect.

But that's what happens when you read a book over 100 years old -- some of the elements are dated! More sadly, some aren't. This was a fascinating read, overall, and Reed always has lots of quotable bits in her books. Here are a few of the sayings that pepper the book:


Whatever is past is over, and I 'm thinking you have no more to do with it than a butterfly has with the empty chrysalis from which he came. The law of life is growth, and we cannot linger--we must always be going on.

The shadow of a sorrow is longer than the sorrow.