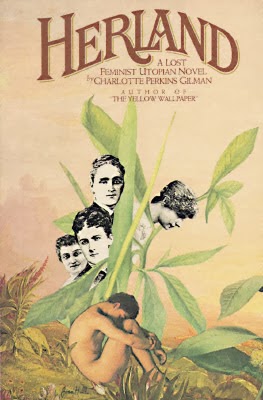 I've owned this for a long time but had hesitated to start it, because of the powerful despair of the only other Gilman I'd read, The Yellow Wallpaper. Spurred on by the Century of Books challenge and this recent review by Bibliolathas, I picked it up this week, and simply raced through it.

It was wonderful -- funny, lively, pointed, and yet as much of a period adventure story as any Rider Haggard. Gilman is so clever, prescient about gender relations, and so wonderfully unscathing in her style.

As the story opens, Herland is about to be discovered by three manly adventurers, Jeff, Terry, and our narrator Vandyke. Jeff idolizes women, wanting to put them on a pedestal and protect them; Terry wants to master women, to have them adore him -- he sees them as his personal playthings (in some respects he reminds me of Lord Flashheart); but Van is more balanced, a sociologist who observes.

Upon their arrival in Herland, they are not welcomed and feted, but rather, captured and imprisoned, while the women decide if they are too dangerous to let out. Part of their role during this captivity is to learn the language and culture of Herland (likening it to "being in a dame school") and to share information about their own culture as well, to help Herlandians to decide whether they are interested in making any connection to the outside world.

Gilman uses this story to point out assumptions made about femininity that are simply culturally based -- at one point, Van muses:


These women, whose essential distinction of motherhood was the dominant note of their whole culture, were strikingly deficient in what we call "femininity." This led me very promptly to the conviction that those "feminine charms" we are so fond of are not feminine at all, but mere reflected masculinity - developed to please us because they had to please us, and in no way essential to the real fulfillment of their great process.

This female utopia that our adventurers have discovered is a land of women -- there are no men, birth occurs through a kind of parthogenesis -- when a woman wants a child she lets the longing arise until she is ready to give birth. When the population began to get larger than was supported by their small country, they all agreed that they would only have one child each. These children were carefully engineered; the "best" women could have more than one, and all the children were raised in shared environments, not as the property of one woman. This country is careful, scientific, and focused on children (they are also a bit fond of eugenics, which brings in more of a darker theme from our modern perspective). The fascination with motherhood as their purpose was a little off-putting for me, but otherwise this was quite an appealing culture. There was sisterhood and togetherness but also time and place for an individual's privacy.

Each woman had a small place of her own, a bedroom and parlour, so to speak, but there are no "homes" in which women and children are confined while men go about doing their daily work. Gilman felt that this romanticization of the home was to blame for many of the difficulties that women in her culture faced, and included that idea in this book. She also brings up questions of class -- when our 3 men are educating their teachers about American culture, they say that women don't work, rather, they are "loved, honoured, and kept in the home to care for the children". They are forced to admit, however, that fully 1/3 of the female population -- the poorer ones -- actually did work, while having homes and children to care for as well.

There are many moments like these, moments that are quite amusing but still make a point about culture and sexism that should be obvious. Unfortunately, many of these remarks, made nearly 100 years ago, are still relevant and still reflect on the ways that our culture proposes "femininity" should work.

The book concludes with Terry being exiled from Herland for an unthinkable crime, one which would not even have been recognized as a crime outside of Herland in Gilman's period. I was pleased to finally see the end of Terry -- he was smug, arrogant and unbearable. Gilman was able to use the three personalities of the men to highlight different aspects of the male gaze, however, and it wasn't just Terry's boorishness that had effects.

This was a wonderful find, a social commentary that is entertaining, clever, and still useful in its gentle approach to pointing out logical inconsistencies in gender roles. If only I could say it was quaint and dated... but it is still powerful and important to read. Definitely worth searching out for everyone.