I reread Griffin & Sabine last summer, many years after my first experience with it. I really love the way these books are made: with lots of beautiful illustration, with letters that slide out of envelopes, typed or handwritten in a lovely brown fountain pen ink. I love the sense of discovery, and the love of all this ephemera. So I had to continue with the next two books in the story of Griffin & Sabine, which I fortunately own with all pieces intact. 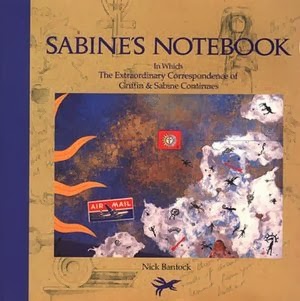 Part two of this trilogy follows Griffin's travels as he leaves London, afraid to meet Sabine who is coming to him. His letters to her are sent from locales all over the world, Tokyo, Alexandria, etc. with appropriate postcard designs and stamps. Sabine's letters come in reply from Griffin's flat, where she is staying. Her comments on his neighbours and London in general are interesting, showing us Griffin's surroundings from a whole new perspective. The only slight problem is in the speed of correspondence -- Griffin keeps moving around, yet Sabine's letters always get to him at general delivery in his many cities. But this is a problem in many, many epistolary novels; how realistic do we want a correspondence to be? Should we expect the inclusion of dull daily details or focus on how long it has been between letters, or simply enjoy the story?

This volume ends in mystery as well, though, as Griffin returns home to find that nobody had been in his flat and his questions make his neighbours think he's going mad. Meanwhile, Sabine writes a letter expressing disappointment that he never came home when he said he would -- she's now back in the islands, the two of them having missed each other in passing again... but how?

I still enjoyed this one, though Griffin's character was getting on my nerves a bit. He seems fearful and a bit spineless, so afraid to meet Sabine in person. And yet, he is beginning to have the same mental connection to her as she has to him, and they are falling madly in love. Which is odd since they've never met. 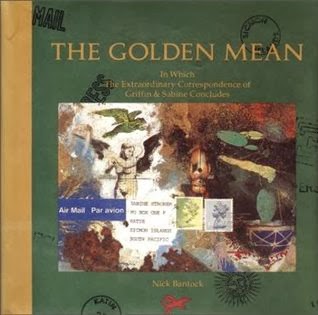 Part three: Griffin is home in London, Sabine is with her parents. Her father is ill and has attracted a new friend/colleague while Sabine was away,  Victor Frolatti. This character is a professor eager to study the mental telepathy between Griffin & Sabine -- but how did he ever hear about it? What does he know? He's relentless and threatening to Sabine, and also begins writing to Griffin.

This twist kind of lost me. Frolatti is described as having oily blue-black hair and piggy eyes, and sounds to me so very much like the scary Italian foreigner described in so many Victorian penny dreadfuls. It put me off a bit, in addition to Griffin's violent language regarding Frolatti in his letters. He seems to want a macho confrontation, but considering he spent the entire previous volume avoiding Sabine, I can't really see him confronting anyone.

In any case, Griffin & Sabine appear to solve the mystery of why they can't meet in either of their home -- they decide to meet halfway, in Alexandria. From whence they've never been seen again...until..........

Well, I guess the last volume ends in mystery once more. I lost interest in this last volume, though. The storyline is slight, but the point of these books really is in the visuals, not the plot. The letters and cards and stamps are once again wonderful. I love Sabine's handwriting, and the effect of pulling actual loose sheets out of envelopes. That pleasure has been diminishing in real life as I write and receive fewer letters, and it was a delight to go through these three books and see how Bantock created this correspondence, and all the attendant stationery sets and so forth that appeared when these books were new.