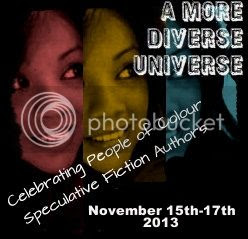 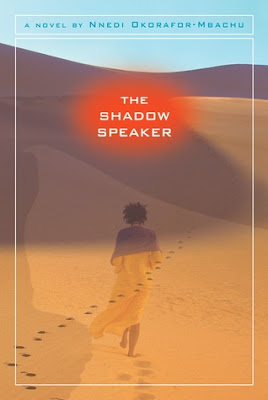 This YA novel was a great discovery: I found it thanks to the More Diverse Universe event sponsored by Aarti at Book Lust, an event happening this weekend. I checked out her many suggestions for titles to read, and this one both looked fascinating AND was at my library :)

I'm glad I picked it up, as it was a very engaging read. It's set in West Africa, in 2070. It's a world in which magic has returned, after a great nuclear destruction that opened up connections between Earth and a few other worlds.

The main character, Ejii, is 14, and she is one of the 'meta-humans' who've appeared following the Great Change. She is a Shadow Speaker, someone who can hear voices from the shadows, who has the gift of tapping into that deep knowledge and understanding. One of her talents is also being able to see in the dark, and having extreme long-range vision. There are other metahumans in this world, with other talents, but regular people don't like them much. There is the predictable distrust and scapegoating of those with differences.

Ejii, however, is a little bit different for other reasons too. Her father used to be chief of her village and region, a position he assumed when their queen Sarauniya Jaa left town. He held that position for a decade, becoming more power-hungry all the time, enforcing laws limiting women's freedoms and divorcing Ejii's mother when she wouldn't support him. Ejii now has many half-siblings, as her father quickly remarried 5 new wives nearly as young as Ejii herself. His corruption comes to an end when Sarauniya Jaa returns unexpectedly and chops off his head at a public event. Yep, chops it right off, in front of Ejii. There is a bit of violence in this book, and questions of when and whether someone has a right to take action in this way. Ejii brings this up a number of times throughout the book.

That's just the beginning: shortly after this blazing introduction, we learn that Jaa is leaving again, sending nervous shockwaves through the community -- what will happen this time? But for Ejii, things are really going to change, as she decides to follow Jaa and her two husbands through the desert, to Jaa's meeting with representatives from one of the other worlds. Ejii's shadows have told her that it is very important that she goes with Jaa to this meeting, that Ejii will be the only one able to avert war.

So with that upon her shoulders, she takes on the dangerous trip, alone but for her talking camel Onion. Along the way she meets a fellow traveller, encounters dangers like living sand storms that scour the flesh off people, a mischevious desert magician, sinkholes into other realities and more. One of her most present dangers is herself; she is coming into her powers as a Shadow Speaker, and if she is not able to incorporate these new powers and rise to the challenge, the only option is for her to be overcome by them, and die in the process.

She eventually does catch up with Jaa, and crosses over into the world of Ginen with her entourage. Ginen is a fascinating creation, a plant-based culture with a varied population and magic-based technology. Ejii comes of age in Ginen, through many shocking events. This is a book full of fabulous imagination, with new species of living beings introduced, with great remaking of traditional themes, and also with complex and engaging characters. Okorafor-Mbachu doesn't shy away from including realistic emotional reactions to violence or loss, or giving her main character issues to deal with that are ambiguous and difficult.

I really enjoyed this story, reading it pretty much straight through. There are other books by this author that I'm going to explore too, as I really like her style.
Posted by Melwyk at 11/16/2013 04:20:00 pm