Brown Girl in the Ring 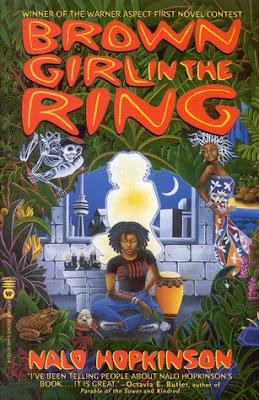 This is the second book I've read by Nalo Hopkinson, but it was her first novel. I've read them both as part of Aarti's More Diverse Universe challenge, the first one, The New Moon's Arms, just last year. I enjoyed that one a lot and kept meaning to get to this one next, but have finally just picked it up. And it's great timing for it, too.

It's set in Toronto, at a time in which the economy and social structure has pretty much collapsed, with everyone affluent moving out to the burbs -- and erecting barriers so those left can't overrun the much more stable and economically viable communities there. Inner Toronto is now a mass of poor survivors of many races, survivalists who squat in old hotels or flats, grow food or barter for it, or belong to gangs like The Posse, the ruling gang whose overlord Rudy is an arrogant, power-hungry drug lord. This is dystopian fiction... or is it? I think Hopkinson may have some of the power of second sight that she's given to the main characters of this novel!

But to be serious -- this is a wonderful read. The Toronto setting is continually evoked: Ti-Jeanne, the main character, lives with her Mami in the Simpson house at what used to be Riverdale Farm. Mami is a healer, growing plants and dispensing stockpiled medications, but she is also an obeah woman, speaking to the spirits in a very literal sense. She calls the spirits and we see them as they appear as characters themselves (you can see two of them on this fantastic cover). Ti-Jeanne is a young woman, with a new baby, who has left her boyfriend Tony because of his drug habit and involvement with the Posse. She's learning that she has the gift of seeing and hearing the spirits, despite not wanting to, and Mami is trying to get her to own up to it and train her in the proper ways to deal with it, so that she doesn't go mad from it. But all Ti-Jeanne can think about is Tony.

But when Tony comes back into their lives, things do not go at all well.

It's hard to summarize the book, as I don't want to spoil the joy of discovery for any new reader. But there is family drama, street kids who live in the former subways, a very villainous villain, thwarted love, spirits both good and bad, a showdown in the CN Tower, and an amazing sense of the Caribbean culture that Mami and Ti-Jeanne are rooted in. Even the rhythms of language reflect that, and it was wonderful to read. It immersed me in this story, making it hard to put down. The incipient violence on every page drove the tension of the story, and the unexpected twists and events continually surprised me. It was shocking, and funny, and horrible, and sad, and utterly fascinating.

The combination of Caribbean mysteries and urban, dystopian Toronto was pitch perfect. It's hard to say whether place or character is stronger in the story -- they were both so well developed. It's a very good read, and if you've never read Hopkinson before, this would be a wonderful introduction to her work.
Posted by Melwyk at 11/17/2013 05:39:00 pm