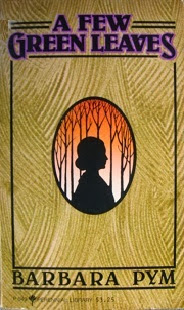 This is one of Pym's later works and feels a little bit darker, or more melancholy than previous books I've read. The story follows Emma Howick, an anthropologist in her 30s (again, an observer) who moves to a small English town for the summer, taking over her mother's cottage. Emma immediately gets involved in the local community, the first few pages taking place on her first weekend there, when she decides to join a group setting out for a walk on the lands belonging to the manor -- and open to the public by custom on the Sunday following Easter.

She thus gets to meet a handful of local eccentrics, including of course the vicar, and his spinster sister Daphne. While Emma thinks that as an anthropologist she can simply observe, she finds herself drawn into the intertwining lives of all these villagers, complicated by the appearance of an old flame, an historian who turns up on her doorstep. Pym says of this meeting,"She had never before experienced the curious awkwardness of meeting somebody you had once loved and now no longer thought about."

There is not a great deal of plot in this story, rather it's about the people -- Pym is excellent at catching every little nuance of individuality and interaction, and she has such an understated way of writing about it that it becomes very enjoyable just to follow along. This story isn't quite as lighthearted as some of the earlier books, though. It reminds me in a way of Penelope Lively's Spiderweb, another novel about an anthropologist who moves to a small village and is quite shocked by the insular and violent happenings she sees there. Lively's novel is darker, with much less humour, but there are still similarities in tone, somehow.

Pym allows for some possibility of happiness and change, though, and the ending of this novel is only a little bit melancholy. The characters and their competing desires will continue to compete, and we can only hope that Emma has decided to enter into life rather than only watching. She's made a start by deciding that she will be staying on in this cottage and becoming a true resident of the village, and this seems to hint that she will be experiencing, as she hopes, a love affair that is not entirely unhappy.

I really liked this book, despite it's more somber tone in comparison to her earlier books. There is still the precise observation, the wry humour, the oddity of her characters (reliably the same kinds as always -- vicars, anthropologists, excellent women -- even some of the exact same characters from earlier books), to enjoy. Emma appears to be a sensible academic, but Pym allows us to see beyond outer appearances, and we get a feeling for Emma's interior life. Pym is good at doing this with many of her characters, with a single sentence that can illuminate a life. Emma, however, as the main character, gets much of our attention, and I found her to be an utterly engaging heroine, the perfect still point at the centre of this novel. Another winner for Pym!
Posted by Melwyk at 11/23/2013 08:30:00 am