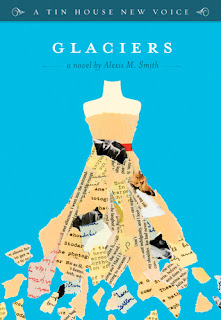 I admit it, I was sucked in by this cover. And by the small size of this book, so pleasant to hold. And by the fact that main character Isabel works in a library and is fond of vintage items.

But. The quirks of the main character came to be a little too much of a perfect representation of the modern hipster. She is young, single, quiet, has a cat, loves vintage fashion and found objects from the past, works in a library, and is in love with a coworker who also happens to be a former soldier. A touch of everything cool there. She is a representation more than a person, and she is cold and distant from her emotional life. It was difficult for me to imagine her as a young girl with love on her mind. At the point that she finally admits her feelings to coworker Spoke, he is leaving to be redeployed. Will she ever see him again? Who knows, but a distant love to pine over is certainly romantic.

The story is brief, a series of sketches of her thoughts and actions over one day. The past is revealed through her memories -- growing up in Alaska, moving to Portland, ending up where she is -- as she moves through her present. The big moments of the day include deciding which vintage outfit to wear, choosing a restaurant for her lunch, and working at her implausible library job. Really, she mends old books in the basement. All day. I'm not sure which kind of library she works at, but it doesn't sound much like the ones I know.

While there were moments of appreciation, overall I was not wowed by this book. I liked the ending, at which Isabel attends a dinner party and each guest has to tell a story. At that moment, I felt as if this book were the prologue to the real story that was about to start...but the book ended. It wasn't a bad book, but was so brief and emotionally spare that I didn't have time or incentive to become involved with the characters or story. I do love that cover though :)
Posted by Melwyk at 9/05/2013 09:00:00 am