An Inquiry into Love and Death 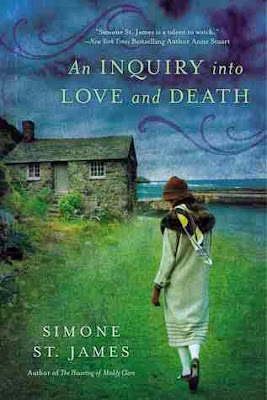 I had to follow up my reading of Simone St James' first novel (The Haunting of Maddy Clare) with her second, An Inquiry into Love and Death. Fortunately for me, she has another coming out in April 2014, because she has become a must read author for me!

I enjoyed this novel greatly. It was very Mary Stewart, with smugglers and ghosts and everything :) The ghost in this particular tale is called Walking John, and he has been well-known in this small seaside community for many years. But more than a legend, or a human attempt to scare off our main character, or even a psychological belief, Walking John is R.E.A.L. And he is terrifying! So scary at moments, and even scarier is when our heroine Jillian realizes that not only is Walking John outside her house, there is ANOTHER GHOST INSIDE IT.

Okay, a little bit of melodramatic reviewing going on here, but what a classically spooky read! And this one still has romance but it's not quite as steamy or descriptive as the first novel was. There are fabulous characters, including a cat, ghosts, vicars, and more.

It is 1924, and Jillian Leigh is one of "those" women, a young woman at Oxford. She gets pulled from her classes though, when her Uncle Toby dies and she is left responsible for identifying his body and dealing with his belongings. He was renting a house in the haunted village of Rothewell, because he was (embarrassingly for her family) a ghost hunter. Jillian goes to Rothewell, not believing in ghosts, not expecting to stay more than a day or two, but she ends up doing both.

The varied inhabitants of the village are described as Jillian meets them, and there are lovely red herrings and false trails laid for the reader everywhere. Who can Jillian trust? Who will be the love interest? All of these questions swirl around a story that relies on the recently concluded Great War for some of its suspenseful elements. Into the mix comes Scotland Yard Inspector Drew Merriken, and at least one of the questions is immediately resolved -- no one else could possibly be the love interest after he arrives! He is quite a dashing character, a former RAF pilot, now detective, handsome, charming, etc. etc. But he also sees Jillian as intelligent and intriguing, rather than odd, as an Oxford girl. Who could resist all that? Not Jillian. And probably not many readers, either ;)

The story made sense, was well plotted, well paced, and had some surprises in it. Even the minor characters were interesting and full characters. The setting was so evocative, the sea and the small town and the ghostly disturbances intensely drawn. I was given shivers by Walking John, an unpredictable and volatile presence, but enjoyed reading about Jillian's dramatic encounters rather than having to experience them myself! The historical details are done just right, and the balance of ghost story and romantic tale is spot on. Definitely a very fun read for the season, and highly recommended for fans of this kind of story.
Posted by Melwyk at 9/23/2013 09:30:00 am