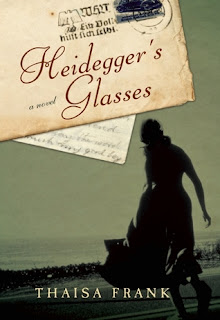 This is an unusual WWII tale, a story of an underground bunker in the waning days of Nazi Germany, filled with multilingual prisoners snatched from the gaping maw of the concentration camps, ordered to answer letters from prisoners to loved ones in their original language.

Thaisa Frank's enormous imagination makes us believe that this bunker actually existed, that this insane idea was as real as many of the other insane ideas held by the Nazis. The existence of this letter writing effort is due to the Nazi belief in occultism; they are afraid that the dead will tip off psychics as to what is really going on, and if they just get their letters answered, they will relent. So Frank populates an old mine shaft with a murmuring horde of writers, overseen by Elie Schacten and Gerhardt Lodenstein, who are both secretly supporters of the Resistance.

The Compound of Scribes, as it is known, has a main street, a cobblestoned, lit-up passage in which the sun turns with a great grinding of gears. There is a miniature house for one representative Jewish couple to stay in, segregating themselves from the others. Most of the scribes sleep under their desks, but they make use of one shared office, the kitchen, a storage closet, and an air shaft above the bathroom, when they need some privacy. It's uncanny, a space that seems out of its time, and a place of relative safety for these workers.

However, at the point that this story takes off, they have just received a letter from philosopher Martin Heidegger to his optometrist and fellow philosopher Asher Englehardt, who is in Auschwitz. What do they do? How do they answer a letter between two writers who are both alive? The result is a compilation created by committee, but it is unfortunately delivered by one of the SS officers from the Compound who is superstitious about his duty and a congenital bumbler. Of course he causes trouble, attracting the kind of trouble you don't want to attract from Nazi headquarters.

The tension in the story -- will they come? have they forgotten? is it a trap? -- leads toward the inevitable conclusion. It's beautifully written, with short letters interspersed with the narrative, and Frank's descriptions of the war torn landscape as well as the characters of the scribes illuminate the book greatly. We see the story through Elie's eyes, mostly, and she has her own reasons for everything she does. But each character has hidden depths, and the book is really about philosophical questions of truth, history, or personal responsibility in a time of such horror. It's a poetic read, with daily depredations described, as well as the efforts made by Scribes, camp prisoners, and even Resistance members to counteract this folly.

It's a look at the Holocaust from an entirely new direction, and the sense that the Scribes are existing in an Underworld, writing letters to the dead, gives it a strange and folktale-like atmosphere. It's quite stunning, really, and an original take on a much examined historical moment.
Posted by Melwyk at 8/10/2013 09:00:00 am