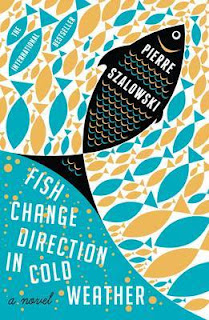 This is a fable about community, set in Montreal during the great 1998 Ice Storm. The young narrator discovers that his parents are going to break up, and in despair he calls to the sky to help him.

The next morning, the Ice Storm begins, and our narrator is convinced he is responsible. As the power fails and there is a rush on supplies in the local stores, the neighbourhood begins to make connections that were never there before. The characters are varied: a closeted gay couple, a single father and his son, our narrator's family, a stripper, and a Russian mathematician who is doing experiments in knot theory using fish -- which must always remain at the same temperature to make his results valid, thus the title. It's a light story, with many of the concerns of the narrator and friends revolving around 'boobs' and suchlike (they are 11 after all). Meanwhile, the adults have lively sex lives of their own, commented on by all.

It's true that very often (perhaps especially in large cities) we do not know our neighbours, preferring to keep some distance. In the few blocks that this story takes place, there are a handful of eccentrics who are forced by the unusual conditions to finally interact. If the story was made up of a bunch of perfectly normal people who help each other out for a day or two, it would prove fairly dull, I think -- I loved the fact that all of the characters had something notably odd or intriguing, a bit of a back story, to jazz things up a bit. On one block in Montreal, I would be surprised NOT to find this many unusual characters!

While the characters do tread the line of representative figures rather than full and complex individuals, I felt that this was completely in keeping with the style and tradition that this novel fits within. The book reads like a French novel (French from France, I mean) transplanted to the streets of Montreal, which makes sense as the author is indeed a French man who has relocated to Quebec. It is quirky, reminding me of the style of Elegance of the Hedgehog, a little bit. It also gives me a sense of the style in the works of Michel Tremblay or Roch Carrier. So if you like superserious, dark fiction, try another title! I saw another reviewer suggest that this would be a good Christmas read, due to the weather conditions of the novel as well as the fact that we give sentimentality and neat, happy endings more of a pass during festive seasons... and I think that is the perfect suggestion.

I really enjoyed this one, finding it a light, quick read, one that ended up being cute and non-depressing despite the possibilities of disaster that the Ice Storm heralded. Perhaps I'm being particularly lenient with my critical faculties as I lived in Montreal during the 1998 Ice Storm, and it was as strange and eerie and disastrous as it is portrayed here. There was indeed a rush on supplies, and many lengthy power outages, even in the centre of Montreal where I was. And there were funny coincidences, like the fact that only a row of 3 shops had power in the streets around me, so they stayed open nearly 24 hours for nearly 3 days -- a noodle shop, a used bookstore, and a sex shop.

Nevertheless, beyond my own personal experiences of the time period of this novel, I thought it was a charming novel with international flair. It's not going to deliver any deep existential epiphanies, but it does provide another look at a city replete with endless variation.
Posted by Melwyk at 8/20/2013 09:00:00 am