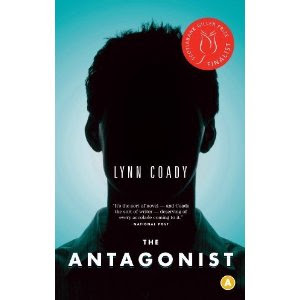 Gordon "Rank" Rankin Jr. relives his life story for us, in a series of emails to Adam Grix -- an old college friend, a writer who has misappropriated Rank's life for use in his latest novel. Rank is pretty steamed as he begins this correspondence with someone he hasn't seen for years, but throughout his long and one-sided conversation he begins to understand the power and the seduction of a story.

He moves from rage to a kind of understanding that he is addicted to the story he is telling himself. Through this retelling he is slowly becoming the author of his own life, not just a pawn in the hands of a larger, outside authorial presence. Rank's voice is a strong one, and a compelling one too. His long, unexpectedly erudite monologue is fascinating and effective, and the emails have a sense of verisimilitude, without being reduced to the kind of emoticon laden telegraphic speech that daily emails often hold.

I've read Coady's previous novel Mean Boy, which I thought was really wonderful as well, and which also deals with male characters. Something I see over and over again in reviews of The Antagonist is the surprise that Coady is able to carry off such a fantastic male narrator -- she does make Rank and his relationships with his friends, his father, and even his mentor all very believable. But, it's noted so frequently that it's beginning to annoy me. Why the surprise? Was anyone going on and on about Richard Wright's Clara Callan and how astonishing it was that he could write from a woman's perspective? Or David Bergen's recent Age of Hope? It irritates me.

Anyhow, the book itself was a great read. Rank is a complex character, a boy who grows into a very large man. At the age of 14 he is already being taken for an adult, and is pushed into the role of thug, goon, hockey enforcer. But he is also a sensitive man, and as we eventually discover, at age 40 he is a high school teacher. He might have been another kind of person if not for his physicality and his home life -- particularly his high-strung father, identified as suffering from 'small man syndrome'. His father's own need to have Rank be the powerful enforcer that he himself has clearly wanted to be shapes the direction of Rank's life in irreversible ways.  And it is that relationship that has the strongest hold on him throughout his story.

The narrative was wonderful; Rank circles around his story, telling us bits and leaving out other parts, then adding more detail in his next missive that finally makes the truth clear -- or what Rank believes to be the truth, anyhow. It was an easy read, in its energy and interest, and yet at the same time a difficult read, with some disturbing details of Rank's childhood and adolescence. His university years are a vital part of the story, as he is relating memories to his old friend Adam, someone who he has not seen since those long ago days. As the story develops we learn just what caused the split between the four guys who were virtually inseparable then. Coady has a keen eye for the small details of social interactions and motivations, and this strengthens all the characters' depictions, male or otherwise.

I really enjoyed this book. I thought that the email monologue format really worked, and Rank's voice comes through clearly, from his initial rage to his increasing self-awareness and resultant sense of acceptance and understanding. But it never turns into a sentimental, utopian conclusion; Rank's final words to Adam are still pretty furious. I have to admit that I do have a weakness for the epistolary style, but it's not always easy to carry it off successfully. Coady succeeds, adapting the form to her story and its needs, as well as the voice of her narrator. It rang true for me, and was both unexpectedly entertaining and emotionally satisfying.
Posted by Melwyk at 7/11/2013 10:17:00 pm