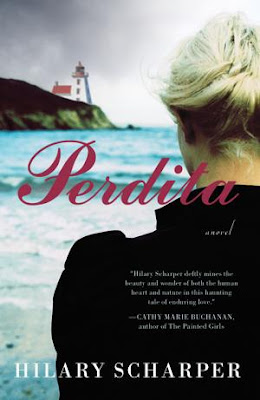 If you would like to visit the Bruce Peninsula in North Ontario both now and then, try this novel of romantic suspense. The modern day story: Garth Hellyer, an historian working for the Longevity Project, interviews a stunning woman in a nursing home who claims to be 134 yr old Marged Brice. She says she hasn't died because of the constant presence of someone called Perdita holding her back. Garth, despite his scepticism, investigates, and agrees to read Marged's journals.

Thus the past is revisited -- Marged's journals are detailed, emotional, and complete, telling a story of a life in the early years of the Bruce. Her family is based at the lighthouse, and they live there all year round. When summer visitors arrive, her world expands. Marged's attachment to the sons of a wealthy family who summer nearby shapes her life. There is also a professor studying birds who spends summers there, and who encourages Marged's naturalist interests and her artistic abilities as well, teaching her to illustrate birds.

Marged is a little bit fey, sensing presences in the local graveyard and feeling a strong connection to "her trees". She knows, ultimately, she won't be able to leave the landscape that holds her so intensely. This, alongside the love interests that arise as she gets older, sets the stage for some drama and confusion. A wild landscape, a passionate yet determined girl, and a supernatural twist: it makes for a pretty fascinating read!

Of the two narratives, I much preferred Marged's journal story. The past was so full of colour and emotion, and felt much more believable to me than the present day story. Garth was a bit of a dud, and his complicated romantic storyline involving a childhood friend felt stilted and uninteresting. I didn't really feel much intrigue with these two, rather, it seemed like Marged had all the excitement! One thing that did drag on a bit was Marged's innocence about whether the men she had feelings for reciprocated them in any way...it was pretty obvious and I was beginning to wonder if she needed to be hit over the head with it to finally clue in.

But despite this, I enjoyed this read, and think it was the perfect summer book. It reminds me of the classic novels of gothic suspense, though the 'gothic' nature lies more in the uncanny landscape than the people. In fact, Scharper wrote a wonderful article describing this novel as "eco-gothic" -- take a look to see how she defined (or didn't define) this term. The historical setting was thoroughly envisioned, with many small details creating a lush background for her story. There were all sorts of fascinating, eccentric supporting characters, mysterious events, threatening men and more. This was a chance find that I was glad to have discovered. Quite entertaining, and a wonderful setting.