The Attractive Rattle of Tea Things

Today I thought I'd share a few quotes from Pym's work about one of my own favourite subjects, and one she talks about extensively... Tea! 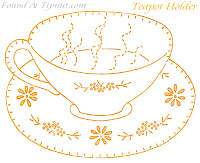 Perhaps there can be too much making of cups of tea, I thought, as I watched Miss Statham filling the heavy teapot. Did we really need a cup of tea? I even said as much to Miss Statham and she looked at me with a hurt, almost angry look, 'Do we need tea? she echoed. 'But Miss Lathbury...' She sounded puzzled and distressed and I began to realise that my question had struck at something deep and fundamental. It was the kind of question that starts a landslide in the mind. I mumbled something about making a joke and that of course one needed tea always, at every hour of the day or night.
~Excellent Women

I was so astonished that I could think of nothing to say, but wondered irrelevantly if I was to be caught with a teapot in my hand on every dramatic occasion.
~ Excellent Women

‘Do you know, Wilmet—’ the dark eyes looked so seriously into mine that I wondered what horror was going to be revealed next — ‘he hadn’t even got a teapot?’
‘Goodness! How did he make tea, then?’
‘He didn’t — he never made tea! Just fancy!’
‘Well, one doesn’t really associate Piers with drinking tea,’ I said.
‘He drinks it now,’ said Keith, in such a governessy tone that I began to feel almost sorry for Piers.
~ A Glass of Blessings

Ianthe was not the type to pour herself a glass of sherry or gin as soon as she got home from a day's work, nor yet to make a cup of tea. One did not make tea at half-past six in the evening like the 'working classes', as her mother would have called them.
~ An Unsuitable Attachment

It was to be a confrontation in daylight and at the tea table, Leonora realised, dealing as calmly as she could with the business of getting an extra cup and saucer and pouring tea.
-- The Sweet Dove Died

‘There is tea over here,’ said a voice at Dulcie’s elbow, and she found Miss Wellcome standing by her. ‘You take a plate and choose what you want, then pay for what you have — a good idea, I think.’
‘Yes, isn’t it — and rather like life,’ said Dulcie. ‘Except that there you can’t always choose exactly what you want.
— No Fond Return of Love

The subject of Miss Clovis’s quarrel with the President was known only to a privileged few and even those knew no more than that it had something to do with the making of tea. Not that the making of tea can ever really be regarded as a petty or trivial matter and Miss Clovis did seem to have been seriously at fault. Hot water from the tap had been used, the kettle had not been quite boiling, the teapot had not been warmed…whatever the details, there had been words, during the course of which other things had come out, things of a darker nature.
-- Less Than Angels

She went out of the room and I could hear her filling a kettle and collecting china. I also heard a step on the stairs and Julian's voice saying, “May I come up? I can hear the attractive rattle of tea things. I hope I'm not too late?”
~ Excellent Women

And of course I must share once again the delightful mixture of tea and libraries that I found recently in a history of my local library from 40 years ago -- the last page had only this: 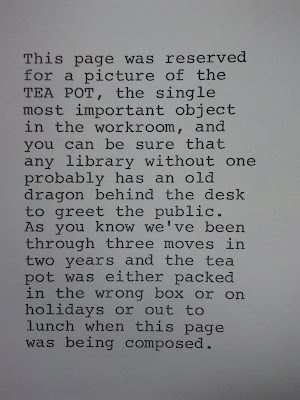