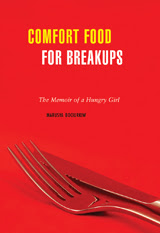 This memoir blends the power that food holds to evoke memory and emotion, with the author's experience of ethnicity, sexuality, and loss. It was wonderful.

Marusya Bociurkiw is a Canadian-Ukrainian author, one whom I've only discovered fairly recently (The first work of hers which I read was her novel Children of Mary, a while ago now). This book includes many Ukrainian themes, mostly in the sense of personal history, and how ethnicity affects the larger experience of life.

It consists of a set of essays, broken up into four thematic sections, but all the essays link into one another, with resonances between them no matter what section they live in. It's loosely arranged by these four themes:


Bociurkiw is also a lesbian, and much of the angst in this writing comes from her struggle to balance her Ukrainian identity, and her family's expectations, with her sexuality. She writes about the many relationships that she has had, and has lost, and how food plays a role in those as well. "My lovers never go hungry." she states, and after reading page after page about her love for food, both in its reality and as a symbol, you immediately believe her!

There is a comment early on that perhaps reveals the impulse toward memoir. It's a statement that resonated with me -- the truism that you begin to live differently at forty has been more than cliché in my own life, and so I appreciated this:


Turning forty, you see the expanse of your life for the first time, like getting onto a rise of land after driving through prairie for a very long while: where you came from, where you need to go. It hurts, to turn forty.


Bociurkiw has close but difficult relationships with family members, and much of the heartbreak in this memoir revolves around the loss of a brother, a brother who had already estranged himself in many ways but occasionally connected with her through their shared culinary heritage. She also shares the ups and downs of a rocky mother-daughter relationship over many years. When she shares a story of the two of them making varennyky (perogies) together, each in their own way, I felt the emotional pull of that moment. When sharing her life stories, she also meditates on the vagaries of memory. In the preface she shares this insight:


I am my family's self-appointed bearer of memory, recalling the absent spaces, recording the recipes, searching for the glimmer of devotion, the aroma of happiness, the back beat of bitterness. Between recipes and stories, I will ask myself a thousand times: who owns these memories? How is it that each of us remembers in a different way?


The second to last essay is simply entitled "Varennyky" and I would have bought this book for this essay alone. It was entertaining and  quite magical for me, as Bociurkiw describes a potluck-style Ukrainian Christmas Eve dinner (brilliant idea, by the way, I think I'll adopt it) for which one of her friends suggests she'll go buy perogies at the grocery store. Bociurkiw is struck dumb by this unthinkable suggestion. But despite her horror at her non-Ukrainian friend deciding to make the varennyky herself, and using a Transcarpathian recipe besides, it turns out to be a hit. And when she later tells her mother -- and all of her mother's varennyky-making church lady friends --  this tale, they simply pause and note the differences, then her mother comments, "I'd like to see her recipe." It's a moment that speaks to me of the danger of fetishizing, or freeze-framing, tradition, making it into an historical curiosity rather than an ever-evolving daily reality. Perhaps this is more of a danger for those of us who are hyphenated Canadians, further down the line from 'the source'.

Bociurkiw shares that recipe, by the way, and a few more besides. It was charming to find the first recipe unexpectedly at the end of one essay, "Sunday Soup", a recipe for minestrone. She plays with the idea of food and heritage, and the symbolism of hospitality, comfort, and identity that lies within those concepts. Sometimes food even fails her. As she says in the essay "Potatoes":


Dionne Brand writes, in A Map to the Door of No Return, "Too much has been made of origins." Some days you eat and eat and it just doesn't feel like home. Roots can nourish, but they can also develop a bitter taste. Sometimes, they can make you ill. That day, at the Plaza of Nations, I ached for something to feel familiar, but none of it did, not even the food.


While this was appealing to me especially because of the Ukrainian themes, there is much more besides. The author has lived in many parts of Canada, and she shares impressions of Toronto, B.C., Alberta and her travels to and from all these places. She also shares essays about her travels, to Ukraine, but also to France, Italy, Turkey, Greece, Switzerland, even homely places like Nova Scotia. There is a lot of traditional memoir, with the sharing of both family stories and details of her many romantic relationships. Food plays a role each time, and reading this book you get a sense of the physical pleasures of food, of the beauty of scent and flavour and even texture of the food we choose to eat.

But we also get the sense that food is, and always has been, part of our identity. Our childhood foods are comfort foods, familiar to us and echoing with meaning, while our willingness to accept and sample the foods of other cultures as we mature may become a sign of our worldliness, a move beyond a single sense of identity. Bociurkiw skillfully intertwines the elements of food, ethnicity, and sexuality, showing that each of us has to choose how much of each ingredient we incorporate to develop our personal identity.

The writing flows, and her choice of detail illuminates each story. This was an absorbing read, full of struggle, and losses, and sorrow, but also containing joy and pleasure in the small beauties of life.
Posted by Melwyk at 6/21/2013 08:30:00 am