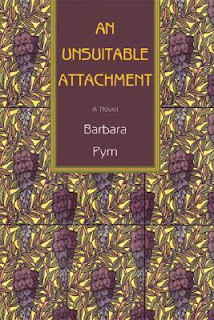 There are a few unsuitable attachments in this book, a few more than the primary one which is considered socially suspect, due to the male party being younger than the female! There is the vicar's wife who has an obsessive focus on her cat Faustina; and there is the nebulous relationship between anthropologist Rupert Stonebird and the vicar's sister-in-law Penelope, two lonely people who seem to me to be temperamentally unsuited.

But the primary titular attachment which is most unsuitable is that between middle-aged librarian Ianthe Broome and her new coworker, the (younger by 5 years) John Challow. John is not quite the type of man that Ianthe generally knows, not a curate, vicar, anthropologist or civil servant, rather, a man who "likes putting up shelves". But that doesn't stop her from following up on her attraction, though John seems rather callow (or shallow?) to me (named well!).

When Ianthe's aunt and uncle (also clergy) hear the news that she is intending to marry John, they come to her vicar's wife, Sophia, to see if she could put in a word.

"She told me she loved this young man -- John, isn't it -- but I never realized that she wanted to marry him." Sophia said.
"At least he works in a library," Bertha murmured. "One does feel that is something."
"He is not, I understand, a qualified librarian?" asked Randolph in a brisker tone, as if he had decided to make the best of a bad job.

I enjoyed Ianthe a great deal, and her interactions with her coworkers, John and Mervyn. There was a lot of library humour, including the three musing over a damaged book just returned -- is it HP sauce? or A1? So familiar... Mervyn, her boss, is a querulous man, older than Ianthe, who still lives with his mother and covets Ianthe's lovely inherited furniture. He gets irritable over many things, many familiar things, including the following:

"Now here's something wrong again," he said, picking up a card. "London colon -- not semi-colon and not comma. I should have thought it wasn't too difficult for other people to get the details right occasionally. That doesn't seem too much to ask, does it? I can't see to everything myself."

Perhaps it is simply librarian humour, but I laughed a lot in this book. Pym's wit is so wry and catches the nuances between people so well. All of the characters exist in relationships of one sort or another, unhappy marriages, unhappy singledom (or hopeful singledom), in close friendships or simply propinquity. The circle of characters includes a couple of people we've met in other books, but the primary relationships are all focused on this story. Members of the parish even go off on a trip to Rome together at one point, a not completely successful pilgrimage of sorts. Sophia is deviously trying to matchmake for her younger sister, so is suspicious of the very self-collected Ianthe.

Pym's familiarity with other books comes through clearly as Sophia and Ianthe stay on alone for a few days to visit Sophia's aunt. As they climb up to her villa, Ianthe comments.

"It's lovely," she said. "It reminds me of The Enchanted April -- the wistaria and the roses..."
Sophia had forgotten what happened in that book, but remembered enough to realize that there was a sort of bringing together of husbands and wives and that in the end everybody was satisfactorily and happily paired off... That was not the sort of thing she wanted to happen and must be prevented at all costs...

I was amused by this exchange, as the entire trip to Italy had put me in mind of Enchanted April myself. I like how Pym both reflects and influences other writers: as I've been reading a few of her novels this week, I see similarities to Elizabeth von Arnim in her work, in the pointed comments and women's relationships especially. But I'm also feeling that her influence has appeared in authors like Alexander McCall Smith (as I mentioned in an earlier post) and also one of my great favourites, Penelope Lively.

I enjoyed the tone of this book and the bit of happiness that comes Ianthe's way. I found this novel particularly entertaining (probably the library content) and complex in the way that the entire narrative and all the characters were woven into one whole story which is hard to tease apart into individual constituents.  Taking one situation out of the context of the whole makes it less plausible, less probable or meaningful. This is one that I've already reread pages of, and know that I'll pick up again, often. I think it has become my new favourite Pym....for the moment....