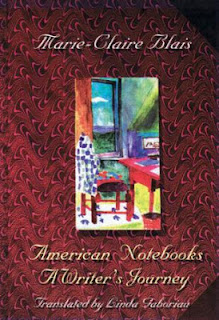 This is a collection of short essays by Québecoise writer Marie-Claire Blais, all focusing on her experiences as a non-American writer living in America.

It begins with her first sojourn in Cambridge, Massachusetts, as a young woman, during the years of social unrest around the Vietnam War. She continues on with stories of all the famous artists, writers, actors and musicians -- and there were many -- whom she met during her early years and also later on, during years that she stayed in Cape Cod and Florida.

Her life is replete with art in all its forms, and her sojourns at the Cape Cod shore in a kind of artist's colony of friends are intriguing. She saw the reclusive Anthony Perkins at a distance once and recalls his sweet smile. She discusses the past lives of Russian exiles, royalty in the old days. And she focuses quite a lot of attention on the social situation of Black Americans, in particular her poet friend Robert, who was partnered with a white woman much older than he was -- after she passes on, he ends up moving to Paris to live like other American exiles, trying to grasp their homeland through distance.

The chapters are brief, usually focusing on one idea or one encounter, but with the same people often returning in multiple chapters, as social circles cross, or relationships widen or deepen. Blais talks about the social conditions at that time in America, the unrest about war and pacifism, racism, poverty, immigration; but  she also looks at it from the perspective of an outsider, a Québecoise writer observing a coterie of American artists. There are discussions about art, about why and how and whether to make Art; there are off the cuff remarks referring to the progression of her own novels as they are in process. Somehow it all feels quite nostalgic, as if it is about a lost world. It doesn't seem to have any particular message, or theme, apart from recollections of this artistic circle that slowly died out and scattered. It's a collection that ends up feeling rather dream-like in its snatches of portraiture and events both pleasant and terrible.

I picked this up by chance, not having it on any list to get to one day -- but ended up reading it bit by bit during lunch breaks and spare moments. It kept me interested over a long while, as I read each short essay and then pondered it until I found time for the next. It seemed to capture a certain era, a particular style of artistic life, that I felt close to while I spent time with this book. It was an interesting and unexpected effect, and I'm always pleased when I'm surprised by my reading. Perhaps now I should read one of her novels...
Posted by Melwyk at 6/19/2013 08:30:00 am