A Tale for the Time Being

A Tale for the Time Being / Ruth Ozeki 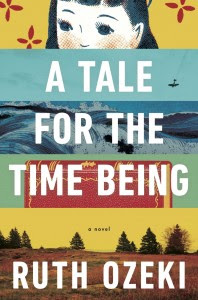 This novel was one I'd been awaiting: I read Ozeki's first novel, My Year of Meats, in those long-lost pre-blogging years, and loved it. And this one looked great: a diary washed ashore in British Columbia, a Japanese teenager's story, Zen Buddhism, depression, the ravages of modern Japanese culture, plus the metafictional twist of the main character Ruth working as a writer, married to someone named Oliver, living in B.C. and being half Japanese -- all the same as Ruth Ozeki herself.

So I was at first a little let down, as I found the beginning a bit slow, even thinking of putting this book aside. But, because I enjoy Ozeki, I kept going. And I am so glad I did, since the story clicked with me about a quarter of the way in (most likely when I slowed down enough to become an attentive reader) and then I could not stop. This turned out to be one of my top reads of the year so far. It was excellent, a collage of stories, reflected in the cover design, one which wove the strands of the tale more and more closely until the final brilliant turn.

It's hard to summarize or identify specific elements that appealed, as everything depends on its context. But even the title is a surprise, something that charmed me. Early on, Japanese diarist Nao (pronounced Now) states:


“My name is Nao, and I am a time being... A time being is someone who lives in time, and that means you, and me, and every one of us who is, or was, or ever will be.”

The idea of time and how it moves is a big part of this book. Nao's great-grandmother Jiko, a 104 yr old Buddhist nun, is a master of time, and tries to teach Nao how to meditate and experience time in the moment. Nao has been experiencing time as a burden, one that she is increasingly willing to cast off.

Meanwhile Ruth experiences what can only be explained as a rupture in the space-time continuum near the end, when she actually inserts herself into the narrative that she is reading, one that unscrolls before her eyes. It was an unexpected development, and brilliant.

The writing in this novel is wonderful; it flows, it eddies, it shoots straight ahead with its relation of the horrible conditions that Nao faces as a bullied schoolgirl. The picture that is drawn of modern Japan is of a rough, cold society. Ruth, on her rainy B.C. island, seems to connect immediately with the story she reads in the diary. And a Japanese crow that has found its way to her forest somehow is also connecting her to this story in a much more mystical manner.

I loved the way the realities of both Nao's life and Ruth's more prosaic one intertwine. As Ruth and Oliver worry about the power going out in storms, or head on down to the local dump, or take the ferry over to town for a dinner out, their lives expand and become fascinating and complex on their own. But in the interactions of both stories, mediated by Ruth's reading, magic happens.

And it's in this metafiction, this shared diary reading between Ruth and the Reader, that I found great delight. The book recognizes the ability of narrative and storytelling to bend and compress time, to record and bring to life events that may be distant from us in time and space, events that we reanimate and live through as if in our present, by reading. Whether it's the diary, emails, old letters scrawled in Japanese or French, or Ruth's tortured novel writing, words and reading are essential to this story.

I loved the complexity, the layers that build as the book goes on, the characters, the setting, the writing itself. This was a fantastic read, and I could go on and on, trying to explain why and how I loved it -- how the characters, major and minor, seeped into my consciousness so that I was dreaming about them; how the B.C. coast and Japanese countryside seemed to be opposite sides of one singular place; how the reversals and leaps between Nao and Ruth's stories kept me anxiously reading; how the motifs of time and water and flow intermingled effortlessly; how I marvelled at Ozeki's technique even as I enjoyed the story itself.

But instead of going on and on, I'll just recommend you read it. That you take time to pay attention to the moment, as Jiko teaches, and find what is revealed there. This was a beautiful book, one I will reread.