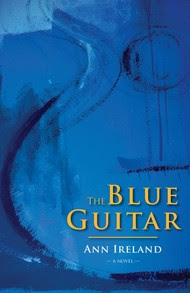 Who will enjoy this book? Those who like a Canadian setting, those who revel in the details of music performance (in this case, guitar), those who find intrigue in the interpersonal machinations of closed groups -- whether in offices or in guitar competitions.

It's a short but fascinating novel about the goings-on at the International Classical Guitar Competition, held in Montreal, and the lives of a few of the competitors and judges. The main character is Toby Hausner, a performer who was full of youthful promise but who had a meltdown on stage in Paris over 10 years ago, and disappeared from the performance world. He's decided to try to make a comeback this year, something his older lover Jasper, a counsellor, deems unhealthy and dangerous. Still, Toby is off, leaving Toronto in the midst of a Flu epidemic, heading to Montreal (which later becomes an issue in the plot, leading Jasper to follow Toby, with depressing results).

Other competitors include middle-aged Lucy, who's decided to challenge herself, having never played in this kind of competition before -- and you can see why, when you read about the backstage wrangling of the judges, who argue that she's way too old to consider, even though her playing was fantastic.

There's also Trace, an unschooled young woman from a remote island in B.C., who appears as if from nowhere with amazing talent to show off. Here, sadly, one of the elements I've seen before in Ireland's writing reappears; the tendency for young, young girls to sleep with much, much older musicians who are in a position of authority. Still just as unpleasant to read about.

This older man is one of the judges, a Cuban with marriage troubles, who had a very hard time getting Cuban authorities to permit his visit to Montreal. These are the characters we follow through the book, with the pressure of performance intensifying personalities, and stirring up unlikely behaviour.

I thought that the story was pretty interesting -- great capturing of the minutiae of performance, from the chance of disaster coming from the tiniest thing like a torn fingernail, to the larger question of self-worth, talent and judgement.

But there a few elements that threw me. The over-involvement of Jasper in Toby's life, and the way that his character is built up, is reversed in the last chapters. Jasper's actions and motives in his rapid flight to make it to Montreal in time for Toby's performance changed him from a character I was actually quite involved in to a selfish, unpleasant creature I cringed from. The softness in his character turned to selfish weakness aimed right at the weak spots in his lover.

And the winner of the competition was a conclusion I hadn't really wanted to see, making the case that quid pro quo and backroom dealings are always the winners in these kind of things. I was disappointed that the conclusion felt so cynical, to me, anyhow.

But, this was still a book that explored different ground than most I've read lately, and was definitely researched extensively and written from the vantage point of all the senses. Sweat and exhaustion, food and sleep, love and despair, and music itself are all enlivened in this writing. Both Toronto and Montreal are great settings, drawn with care, and add a lot to the story. Music lovers will be intrigued.