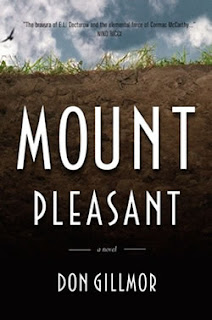 This is a novel that strongly reminded me of another I've read recently, Bill Gaston's The World. It is set in Toronto and features a man in late middle-age, going through a financial and existential crisis.

But these novels also differ. Mount Pleasant is the story of Harry Salter, born of wealthy parents in Rosedale, married, with an adult son, and shuddering under a huge debtload. He is reduced to waiting for his long estranged father to die in order to receive his inheritance, which he hopes will wipe out most of the debt he is currently shouldering. Alas, when his father dies, he discovers that there is only a few thousand left for him.

He tries to trace the money, trying to figure out where it all could have gone. This involves interrogating his father's business partners, old-money shysters all, as well as forming a short-lived liaison with Dixie, his father's last and much younger girlfriend, who is also furious at the lack of the payoff that she'd been expecting.

The story tackles issues of expectations and entitlement among people who are accustomed to having money. As such, I found myself a bit disengaged with the characters. The story felt one-note to me, going over this financial ground repeatedly -- Harry's lack of money, his mother's lack of money, his father's business partners' manipulation of money, and so on. I'm sure it is a comment on the financial trauma of the past few years, but a little too much of a good thing, maybe. The author is known more as a non-fiction writer, and perhaps that's why I found the fictional aspects of plot and character a bit weak.

The narrative is carried by straight-forward writing, with clever observations, humour, and some entertaining interplay especially between Harry and his son's bossy girlfriend. The setting was great; Toronto really breathes here. The characters weren't so lively, especially the women, who seemed to be simply sketched in. But, it's likely that I am just not the right reader for this one, as I have little patience with the focus of this story: Toronto, male crisis, rich people losing some of their money. It was interesting, but ultimately fell flat for me.