Speaking from among the bones 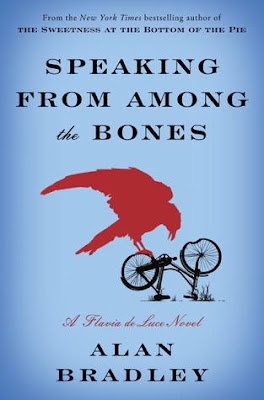 This is the latest in the Flavia de Luce series, and it was such a satisfying read! I have enjoyed all the books in this series, but this one was extra special. There is so much character development, a clever mystery, some détente between sisters -- and one heck of a cliffhanger ending as well.

In this volume, Flavia is instrumental in discovering the whereabouts of the missing church organist, Mr. Collicutt. Unfortunately, he is already dead. And occupying the long-closed tomb of the church's patron saint, St Tancred.

This sets off a whirlwind search for clues and patterns, with Flavia encountering two other amateur sleuths on the case (both adults), finding people who mistake her for her long-lost mother Harriet, deliberating on the history and existence of holy relics, ruminating about her place in her family and the wider world, crawling through the muck of mysterious graveyard tunnels, falling into mortal danger, and creating new chemical tests to prove her theories... just to name a few of her activities.

There was a great deal of action in this book, with many characters to follow. Yet Flavia is still the heart of the story, and in this one seems to have more heart, somehow. She is becoming ever so slightly more self-aware as her world is changing around her. The family is on the verge of losing Buckshaw, and eldest sister Feely is shortly to be married and leave the family circle altogether. These things give Flavia an edge of anxiety that she doesn't necessarily recognize in herself, but which add depth to her character.

Flavia de Luce was a delight to read about right from the beginning, and book five has topped its predecessors, in my opinion. It is finely written, amusingly acerbic, full of personality and pathos, and leaves us wanting book six rather desperately! An excellent entry in this series.
Posted by Melwyk at 1/29/2013 09:00:00 am