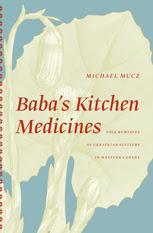 This is a fascinating book I received thanks to the University of Alberta Press. As many longtime readers may know, I have a Western Canadian-Ukrainian background, so when I saw this book-- well, I knew instantly that I had to read it! And I was right. It's a combination of Ukrainian/Western Canadian history, and the history of herbalism and traditional health practices, another topic I have always been interested in.

Mucz is a professor of botany and ecology with the University of Alberta. In this comprehensive work, he looks at the history of home remedies within Ukrainian settlements in Western Canada, with most of the 'medicines' passed along by the women who took care of everyone. Besides the traditional herbal and plant mixtures that I was expecting (many of which travelled with them from Ukraine) there were strange and harmful treatments using things found at the general stores in Canada -- kerosene, petroleum, and so on. He shows how treatments for every conceivable ill were adapted to the local availability of plants in addition to new store-bought products. I found it intriguing that remedies could also differ among settlements, depending on which part of Ukraine the local settlers had originally come from.

Some of the treatments, ie: getting rid of warts by washing them in your own urine on the day of a full or a new moon, seem based in superstition -- but others, such as using yarrow poultices for bleeding sores, are accepted practice in herbal medicine and are still used today. The book tackles treatments by condition, so you can easily flip through and see what was in common use for a sore throat, for example. But it also delves into the historical moment, looking at the conditions that Ukrainian settlers were facing in daily life, and especially the way that women experienced their lives. Mention of endless pregnancies and the resulting added hard work make you realize the grinding nature of their lives, and understand the quiet tradition of herbs for pregnancies and for avoiding the same.

The book is based on interviews with over 200 Ukrainians who had settled in the West, mostly Alberta, from 1890 on, mostly elderly people who were children growing up in those years. There are stories and excerpts from the interviews throughout, as well as many historical photographs that capture the life of homesteaders. There are maps to help situate where the traditions are coming from, and excellent notes, appendices and as usual with this press, a wonderful index. (I have to mention again how much I love the practice of the U of A press of including the proofreader, copyeditor and indexer by name in the publishing data.)

I loved reading this. I don't think I can sum it up any better than they have on the back of the book:


Baba's Kitchen Medicines is a thorough, charming, and often moving work of anthropology, history, and ethnobotany that will find itself at home on all manner of bookshelves.