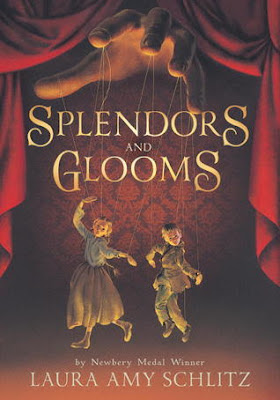 This was an irresistible read for my first choice for the RIP Challenge! There is just something about marionettes that I find inherently creepy... and this lived up to expectations.

It begins in 1860, with Clara Wintermute, the only surviving child in a doctor's family, all her siblings (including a twin brother) having died of cholera some years before. Her life is constrained by the overcautious care of her parents as a result, and by her mother's insistence on continually including The Others in all family events. In this case, they are included in Clara's birthday, which opens the book.

If this isn't creepy enough, we soon meet Gaspare Grisini, a puppetmaster who Clara has seen perform on the streets and demands to have as entertainment for her party. He brings along his two orphan assistants, ladylike Lizzie Rose and the younger and scruffier urchin Parsefall.

After a debacle of a party, Clara disappears overnight. Grisini is suspected but there is no trace of Clara. The story then moves to focus on the trials of Lizzie Rose and Parsefall, once Grisini disappears from their lodgings. In dire straits, they receive an offer of assistance from Cassandra Sagredo, an "old friend of Grisini's" -- a woman the reader has already been introduced to as a sorceress. They then pack up all their belongings, including puppets and puppet theatre (including one marionette who strangely resembles Clara Wintermute) and head north to Strachan's Ghyll to meet up with Cassandra, and though they don't know it yet, with Grisini.

All these storylines intertwine and come to a quite thrilling conclusion. The writing is excellent, drawing the reader along paths of mystery and suspicion, and the patient reader will see them connected in every detail as the story goes along. It has a Victorian atmosphere, with characters and settings to enthrall and entertain. It even has much of the action happening at Christmas, with snow and ice and presents implicated in the drama.

It is Dickensian and yet "Clarke-ian" -- is that an adjective yet? Very redolent with the aura of Susanna Clarke ;) It is aimed at juvenile readers, and I would recommend it to good readers anywhere from 12 up if they like a shivery story -- though there are one or two scenes that may be a bit beyond children. But I also enjoyed it as an adult reader, finding the story raised up enough ideas and images to engage adults.

This theme of creepy puppets seems to be becoming a theme in my RIP reading, with Joanne Owens' The Puppetmaster a very memorable read in 2009. Can't wait to read another in next year's challenge...any suggestions?

*there was a great review of this one and another similar children's tale in the NYT this weekend!