Halfway to the East 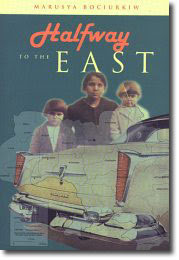 This is a collection of poems which takes the author's sense of disconnection, both as a child of Ukrainian immigrants and a lesbian in an unwelcoming setting, and transforms it into resonant art.

The first sections of the book "I Hear them Singing All the Time" and "Eternal Memory" deal mainly with issues of Ukrainian heritage. Her grandmother (Baba), born in Ukraine, is a dominating figure in these poems -- her wish to return to her homeland, her loss of her own family and her language play a part in the way the poems are shaped. Baba tries to hold on to traditions, making pysanky as a family activity, and baking Easter bread to be blessed at church. She recommends that the narrator stay home next year and make her own bread to take to church... "less trouble dat way".

Bociurkiw's own sense of loss of family and heritage is revealed in the next section of the book, "Strange Fruit", as some of these same themes are revisited in light of her identity as a lesbian. The shunning that occurs when Baba realizes what it means is sharp and painful; the few lines in which Bociurkiw's brother phones her to tell her not to come home for Easter were wrenching. Baba's helpful suggestion to 'stay home next year' begins to take on unintended meaning.

The last section of the book, "Anything to do with Roads", seems to be to tie everything together. In these poems, Ukrainian-ness and sexual identity seem to merge to become issues in one whole life. The image of roads and travel weave throughout this section, whether focusing on Ukrainian memory or on Bociurkiw's sense of always being at different points on a journey through life. There are poems relating long drives at Christmas, at the height of summer, across America or even walks down a city street, in which all of Bociurkiw's concerns seem to meld. The poetry is peppered with Ukrainian words, with Baba's own voice in stilted English, and it evokes a complex picture of a grandmother both known and unknown. Perhaps because of my own roots as a Prairie girl with Ukrainian background, I could clearly envision Baba and her surroundings. But the images are strong and yet multilayered enough to appeal to any reader, I think.

This was an unusual read, with similar themes to the novel I read by this author last year, The Children of Mary. The language is clear yet evocative of place, and I will close with just one example of an image that snagged my imagination:

Now sleep is the train you take back to the old country
a life flashing past in blurred window frames
sleep your rehearsal for death
your last immigration....