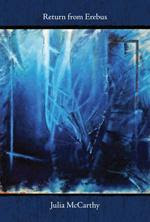 Another fascinating collection of poetry that I discovered recently, Return From Erebus has a mythical theme running through it: Erebus is the outer edges of the Underworld, in Greek mythology.

This book was on the Relit longlist this year, and won the CAA (Canadian Authors Association) Poetry Award. The poems are rich and dense, exhibiting a vast control of language. Some of the images simply grabbed me -- for example, the beginning of the poem "Beneath Cyrillic Stars"

The full moon is a stamp
on a dark letter
arriving and arriving
Cyrillic stars ... their untranslatable script
bleeding through

and later in the same poem:

...the sound thread makes
pulling its thin river of colour
through the eye
of a needle

I think that was my favourite poem in the collection, but there were many others that caught the imagination as well. She's incorporating myth, colour, quotes, and references to other poets. I'm sure there is a lot that I'm missing, but as a relatively naive poem reader I still greatly enjoyed the way her words flowed from image to sound to deep reflection. There are many poems dealing with colours -- mainly white, black and grey -- which gives a sense of quietude and a wintery effect. I found the references to Erebus and to various classical figures fit together with the mood of the collection very well: it was constructed to feel like a work in which each piece was dependent on the others.

My only hesitation with the book was that some of the poems incorporate language so archaic, so obscure, that I had no idea what she was talking about. I consider my vocabulary and my etymological puzzling-out skills fairly good but I was stumped a few times, and it really took me out of the poem. However, as a reader it is our obligation to read what the author has written, not what we want them to have written, after all. After searching out the words previously unknown to me, the poems became perhaps more comprehensible but I still felt myself stumble a bit when I came to them.
Still, reading this was quite an experience. Lots of deep imagery and a sense of powerful movement as the collection progressed. I really thought the concept of Erebus added extra resonance to the way the poems were ordered within the book, with each poem adding layers to those found on either side. I will have to reread this one a few times to really grasp it; but that is a rewarding prospect.

***Update*** the publisher has just made me aware of a great series on AudioBoo -- Julia McCarthy reads 6 poems from this collection, plus there's a recent interview posted. And then check out Brick Books' AudioBoo account because there are literally hundreds of poems to listen to, read by their authors! Neat stuff :)
*************************************
For this year's Canadian Book Challenge I've chosen as my theme "Small-Press-Palooza" Thus, for each book I'm including a link to the small press who has published it. Take a look -- there are wonderful small presses all over Canada!


Accessory to this Collection: In honour of this book's title and themes of the Underworld recovered, I'm suggesting another piece from my sister's Goddess Collection jewelry line: this time it's Persephone. As she describes it:
Dark Garnet symbolizes pomegranate seeds, and these ‘seeds’ are surrounded by an airy spring-like combination of Rose Quartz and Peridot. The beautiful embrace of Spring delivered into Winter’s icy grasp. 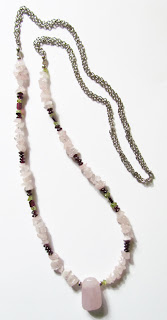