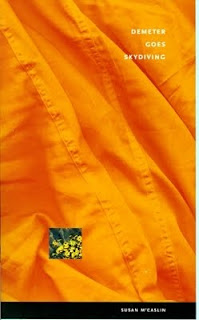 This collection from new-to-me poet McCaslin was an intriguing read. The concept behind it, as McCaslin states in her foreword, is "what if Demeter, the timeless fertility goddess of ancient Greek myth, slipped through a crack into the twenty-first century, shook off her ankle bracelets, corn tassels, and garlands, and began a tour of our improbable culture"?

If you are familiar with the myth of Demeter and Persephone, you'll know that Demeter spent 6 months of the year searching for her daughter, who'd been abducted and spent those six months with her husband Hades in the underworld. In this collection, Demeter is trying to restore the daughters of today. She ranges from watching High Noon and Extreme Makeover in her hotel room, to trying to adopt Britney Spears. She goes skydiving (of course) and does lunch at the Savoy Grill. She wanders the globe, ending up in Iraq and at the foot of the Kokanee Glacier in B.C.

One memorable poem, called "Demeter Tries to Adopt Britney Spears" is striking because of McCaslin's ability to intertwine classical references -- to Venus, to Orpheus, and so forth -- with the nearly mythical status of young female pop stars and their messed up modern lives. In this piece, Demeter reveals her sympathy for a girl who is swamped by celebrity and media attention, causing her to suffer the breakdowns and crazy behaviour we've all heard about. It's a poem that really does make you think about the expectations of femininity+sexual persona that young women are subjected to today; the contradictory roles of Madonna and whore are still going strong, and are tearing young (and not so young) women apart. (you can see an excerpt of it thanks to McCaslin's website)

There are a couple of lovely images of a harvest goddess experiencing our urban world; how Demeter's approach clashes with our rushed, disconnected lives. Within this section, there are also a couple of poems from Persephone's perspective, and even one in which Hades tries to defend himself. I felt that the concept was very strong, and allowed for a broad set of classical references which caused these poems to resonate with me. The elements of myth opened up a new perspective on our modern world.

In addition to the Demeter series, this collection contains a second section of poems called Old Love, which also include some mythical references, to Gaia, to Sophia, and of course to the many permutations of love. The final section, a seven sonnet cycle entitled "Corona Anniversaire", was stunningly beautiful. Each sonnet begins with the final line of the previous; the technical aspect of it interested me, as it was done so skillfully. But the poems themselves are very beautiful and memorable, and I really loved this piece. They also reflect and incorporate classical references, in a different way than the Demeter poems, but still carrying that resonance.

I am so glad to have discovered this poet, and this particular book, thanks to the good graces of the University of Alberta Press. I'm not sure I'd have known about it if they hadn't offered to send me a copy to peruse, so I really must thank them!

University of Alberta Press is a small press associated with (surprise) the University of Alberta! They state: "The UAP publishes in the areas of biography, history, language, literature, natural history, regional interest, travel narratives and reference books. UAP contributes to the intellectual and cultural life of Alberta and Canada by publishing well-edited, research-based knowledge and creative thought that has undergone rigorous peer-review, is of real value to natural constituencies, adheres to quality publication standards and is supported by diligent marketing efforts."

I know there are some bloggers who create lists of read-alikes in their book reviews, or create playlists of music to accompany a read. But I've never been that much of a music person. Instead I want to highlight another accessory for this book... a literal accessory. The latest collection, just launched, in my sister's Nutz About You jewelry line, is called The Goddess Collection. Take a look at her piece called Demeter. This gorgeous book of poetry wrapped up with a necklace called Demeter would make a great Christmas/other occasion gift for the women in your life... just saying! And to carry on the theme...they both come from Alberta :) 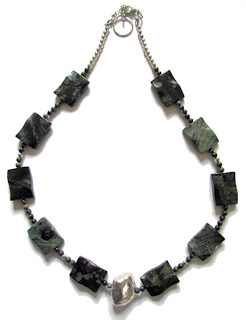