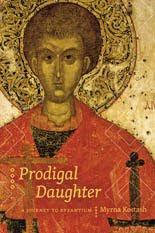 This was a fascinating travel memoir by Canadian writer Myrna Kostash. I was originally interested because of our shared Ukrainian heritage (her other work has been quite focused on Ukrainian-ness). But this turned out to be a wider exploration of Orthodoxy than I'd expected, and taught me so, so much about the history of Orthodoxy from Greece to Byzantium and the Balkans, to the outer reaches of Ukraine. It covers the entire region, using St. Demetrius of Thessalonica (illustrated with one example of his icon on the cover) to tie her search together.

I found it illuminating that in her travels, a priest tells her that the Orthodox are not defined by nationhood (ie: Ukrainian, Greek, Bulgarian...) but rather belong to one state, that of the Oikoumene -- like a Commonwealth -- a word that is obviously related to "ecumenical". It makes for a detailed and absorbing story as Kostash travels throughout the region, tracking down sightings of Demetrius, visiting monasteries, talking to scholars with diverse ideas on the range of Demetrius' miracles and where his holy relics lie. She's not limited to one country but rather is tracking down the history of an idea.

Kostash has roots in Orthodoxy, something my own Ukrainian family was not connected with, so I don't have a personal link to the icons and rituals she discusses in the book. However, she makes her search wide-ranging and yet particular enough that I found it both comprehensible and fascinating. Her encounters with locals, priests and scholars alike, and with her friends in the many countries she visits, paint a colourful picture of a part of the world I really know little about. I feel I know much more about the deep lines of conflict and cooperation that exist between these countries -- lines that are evident even (and perhaps especially) in terms of religion.

I had to read it slowly, and take each chapter as a separate trip in itself, but by the time I reached the end of the book and found Kostash returning to the beginning again -- the door of her childhood church -- I felt it had created a complete circle for the reader. We were seeing the same setting with eyes that had been opened by history. I was impressed by the depth of research in this book, as well as the open questioning Kostash had about the place of religion in her life and her work. I don't often find, in a book not intended for a religious audience, the kind of discussion about faith which she includes, and it was rather intriguing, actually.

If you like church history (which I happen to), or history of the Balkan regions, or travel writing -- well, you will find something to love here. I especially enjoyed her retelling of the life of Demetrius and her explanations of the conventions of icon writing.

Once again, Kostash has written a book thoroughly grounded in scholarship and yet tied to her own life and our current society. It is quite an accomplishment.