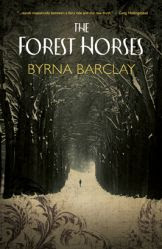 This is an extraordinary book. I really loved it. It's from one of my favourite small publishers, who always create beautiful books: look at the cover...it is a wonderful double design and I feel it really says a lot about the book itself... the character is Russia, and Russia is the character.

This is the story of Signe, a middle aged woman dealing with a family tragedy who decides to travel back to Russia to search out her family roots. Her parents and aunt came from Russia to Canada when she was a very young child, and despite her fears of water she is going on a river cruise starting in St Petersburg and stopping at the island she grew up on.

Her parents, Pytor and Lena, meet in a very unusual way: Pytor kidnaps Lena rather accidentally when he steals a herd of Gotland ponies from Northern Sweden to sell back in Russia (Lena's father owns the herd and she is tending it at the time). After facing down the challenges of anger, distress and the lack of a common language, they end up becoming lovers and then spouses. It sounds strange, but is wonderfully told and makes sense in the story. Pytor is an adventurer and inadvertently kidnapped Lena, and his brash charm seems to win her over. Lena herself is quite practical, and makes the best of things both for herself and for her beloved herd of ponies.

Peter takes Lena back to Russia, right in time for the Siege of Leningrad. Being the hustler that he is, he gets the two of them, and his sister, out of the city and they make a place for themselves on a distant island, along with their ponies. But as the city slowly starves, he realizes their tiny, strong ponies can travel the ice road back to the city, laden with food.

Meanwhile, we also hear the tale of Signe's children (one deceased, one irretrievably brain-damaged), as well as the story of Lena's own Swedish mother. Signe is travelling the river, facing down her fears of water and of the past, while befriending the Russian ornithologist and tour guide working for the cruise. Her story floats on the outlines of her parents', which is by far the strongest element. The heart of the book is Peter and Lena, and the ponies. And it is wonderful. The landscape, the relationships, the privations of war, the struggle to survive, all of this comes through in a vibrant narrative.

The story weaves all these elements together and reveals a picture of family through the generations, taking us from Sweden to Russia to a Canadian homestead in Livelong, Saskatchewan. It has a rich folktale-like atmosphere at times, and was utterly absorbing. I really loved the Russian and Swedish bits, and found Signe's own story only slightly less fascinating. A great read, especially if you like historical fiction or family sagas. Or horses! Recommended.
Posted by Melwyk at 5/05/2011 08:49:00 pm