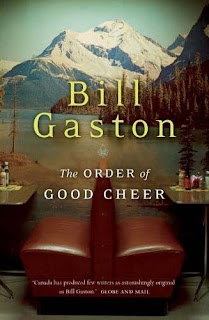 Another book I picked up as part of my Canadian Book Challenge... deciding that I should read some male authors new to me wasn't as difficult as the first part of my challenge, reading female authors new to me. That is simply because I read far more women than men, so there is a huge pool to choose from here. Still, one of the reasons I read more women is they have a more immediate appeal so it's been a game of reading first chapters of many books to find one that keeps my interest.

Bill Gaston's book caught my interest immediately, and I ended up really enjoying this read. It was partly the gorgeous cover and partly the historical content that convinced me to pick it up, but the writing was appealing from the start. It's set partially in modern-day Prince Rupert, a small town in Northern B.C., and partially in Nova Scotia in 1606/1607. In this era, Champlain and his compatriots were trying to create a settlement in the new world for France. The group is made up of nobles and a mishmash of working men -- soldiers, carpenters, cook, surgeon, priest and so on. Often with two timelines like this, I have problems flipping from one era to another. But, I read this book over a couple of weeks so each time the era changed, I put it down until my next chance to read a bit. I found this worked very well.

Champlain is the main character, sort of, in his part of the book. Really there are a few men amongst the group who take a central role. The carpenter Lucien begins a clandestine relationship with a Mi'qmah girl (it is strictly forbidden to fraternize with the local savages); the priest struggles with the point of his being there at all; Champlain himself tries to forestall the reappearance of scurvy which carried off many of the men who had been there the previous winter before reinforcements came from France. And to counteract the boredom and bad feelings and fear of disease, he decides that the best route is to party. He creates the Order of Good Cheer (this is based in historical fact) and each night a different person is responsible for creating entertainment. This gets them through the dark days despite difficulty and despair.

Meanwhile, in present day B.C., Andy is having a bit of a midlife crisis. Never married, he has remained in his hometown and works at the local mill, a job that both pays well and allows him hours of reading time. He's known as the "clever" person in town, and has to hold himself back from contributing too much information at the wrong time, in order to remain well liked and not mocked. He is in a bit of a lather because his high school girlfriend Laura, who had left to go to Toronto after graduation eighteen years before and broken up with him, is returning home to look after her mother. What will she think of him? How can he ease the reunion? At the same time, his best friend Drew is going through hard times; his marriage is breaking up, his son doesn't really speak to him, and his drinking habit is becoming more than just a casual habit. Andy is currently reading Champlain's memoirs, and is inspired to cheer up everyone and create a gathering which encompasses all the characters we've met throughout his story. It incorporates his mother and her friends, Laura (of course), Drew and his soon-to-be exwife and his son, a Chinese woman who is in town to inspect the fish plant, and a few native friends who bring the food. It's a crazy party that goes in all directions, but seems to tie up loose ends and bring a sense of closure to Andy's story.

The writing was mesmerizing; especially in Champlain's sections the vast natural landscape is evoked strongly. The sense that they are a tiny settlement isolated in a huge unknowable space is very present, as is the comparison of their lives with those of the native groups who come and go around them. But in Andy's part of the story, the natural world is also vast and isolates his community to some degree as well. I thought there were many parallels between these two men, and while Gaston does not belabour the point or draw obvious comparisons, the two stories complement one another. While it is a bit long, I did enjoy the writing itself and the arc of each story.

I appreciated the struggle of these two men to make sense of their lives and surroundings, their determination to make the best of things and do something to improve morale in their own circles. Each person in the story had their own particular life, their own particular struggles, but coming together in community made a difference to them. And I think that that idea is still a good one, and a useful one, as we all face our own difficulties. This book was altogether an unexpected find and a serendipitous one. I thought it was a great read. 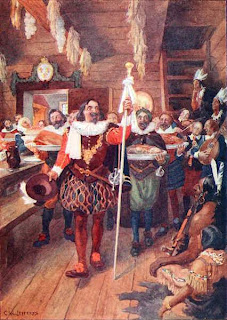