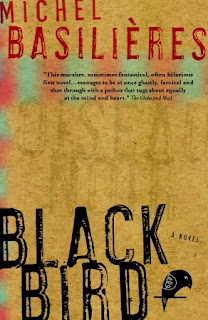 For my Canadian Book Challenge reading, I thought I'd pick up this book set in Quebec -- it is set during the era of the FLQ and deals with the machinations of a very unusual family. The Desouche family is half English and half French, and they all live in a big old house connected to a funeral home on the other side. This is convenient for the family business, which is grave robbing. Grandfather and Uncle run the business, Father is too squeamish to join in, Step-Grandmother has a pet crow in the kitchen, Mother sleeps nearly all the time, while twins Jean-Baptiste and Marie split definitively down the French/English line -- Jean Marc is a writer who reads and writes only English, Marie turns into a secretive Separatist. This is a strange family.

It's a family saga that incorporates three generations simultaneously. Grandfather and Father and Jean-Baptiste; Step-Grandmother (who only speaks French), Mother (who only speaks English) and Marie; they are all intertwined, generationally and culturally. The strange progression of the family business is tied in with Marie's separatist friends; Jean-Baptiste's feeble poetry ends up causing him to be suspected of separatist tendencies (which couldn't be further from the truth); meanwhile mad goings-on by Dr. Hyde at the Royal Victoria hospital up the hill reach their apex thanks to the random death of Marie's separatist lover Hubert. All the threads are connected and pulling on one jostles the entire web. It is hard to summarize the plot of the book as it is made up of circles within circles -- but it is clever and amusing.

Basilieres admits that he plays fast and loose with historical fact in this novel. There are some inconsistencies that gave me pause, but the book has an energy of its own, careening toward its conclusion. It's hilarious, terrifying and entertaining, although the adaptation of some historical elements did bother me. While I didn't mind the exaggeration and the recasting of real historical figures into fictional analogues (such as Dr. Penfield and his brain experiments inspiring the crazed Frankenstein-like Dr. Hyde, which was actually quite funny) there is an instance near the end when Marie kidnaps a diplomat -- and that felt a bit too close to the bone for my liking.

Still, this was a very entertaining read. The setting was used to great effect; the Mountain in the centre of Montreal, the very familiar to me Atwater Avenue, and varied nooks and crannies of the city. It was fun, original, clever, absorbing, crackling with energy and overall a really great book. A nice find for this reading challenge, for sure.

I'll finish with one quote I really enjoyed -- it is Jean-Baptiste and Marie's birthday, and she is looking for a gift for him. She goes into a bookstore as a book is the obvious choice for him, but realizes that he doesn't read French, and there is no way she is going to spend money on any "English writers and their Toronto publishers", so she finds what she thinks is perfect -- a blank book. Nothing defaced by that maudit anglais type for Marie! But her intended insult is subverted when Jean-Baptiste opens his gift:

When Jean-Baptiste opened the book, words deserted him.

What is a blank book? he thought. It's a book waiting to be written. It's not simply blank paper, on which one can scrawl anything: lists, phone numbers, meaningless doodles. It's cut to size and bound in boards because it's a complete object whose leaves follow one another from beginning to end, continuously, like a journey or a lifetime. A blank book is not nothing, it's simply an untaken journey, an unlived life. It's a concrete potentiality, and, as such, an invitation and an affirmation. It's an acknowledgement that a book should be written upon it, that it can become anything. It can mean anything. And because its meaning must be physically manifest upon its blank pages, it can mean precisely what its owner -- its writer, its reader -- wants. The giving of a blank book is the giving of a voice.

Michel Basilieres lives in Toronto and is writing his second novel. His other writing projects include a produced stage play, independent film work and a radio drama for the CBC, as well as arts journalism. He has worked as a bookseller in both Toronto and Montreal.