Lehmann's Ballad and the Source 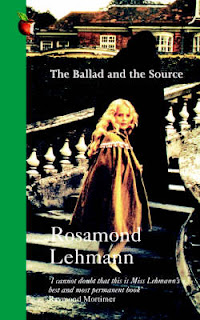 Another Virago off my shelf for Virago Reading Week, hosted by Carolyn at A Few of my Favourite Books and Rachel at BookSnob.

I've read quite a few of Lehmann's books and have enjoyed most of them -- I began with Dusty Answer, and was an immediate fan (even though Lehmann said herself that she couldn't stand the over-romanticized character of Judith years after writing it).

This one is a bit different than her other works; for one thing, it is her only work not set in her own time. It is set slightly earlier, from the mid/late Victorian Era to the First World War. Like my first read this week, Elizabeth Taylor's Angel, this book features another strong, self-contained, domineering central character, that of Sybil Anstley Jardine. Mrs. Jardine is considered quite elderly by the little girls who are invited up to the neighbouring big house for tea when Mrs. Jardine returns to residence there. Although their parents exchange a dubious look at this invitation, sisters Jess and Rebecca are taken by their governess to meet Mrs. Jardine, whose charms immediately win over Rebecca, a ten year old who later becomes the unlikely confidante of the infamous Mrs. Jardine.

While I enjoyed reading this, and was intrigued by many of the over-the-top plot incidents, it was rather melodramatic. In other overviews of Lehmann's work, this book has been mentioned as the most melodramatic of her works and I must agree. We have a fallen woman, family madness, sexual power trips, possible incest, kidnapping, and so on and so on. That this history is basically told out to a ten year old is a strain on the reader's belief, but the absolutely self-absorbed and self-justifying nature of Mrs. Jardine makes it just possible that this could have occurred.

The middle section of the book is essentially one character telling the story to another, which does begin to pall just a bit. But, I was driven to continue, to try to figure out this very messed up family and discover just what was going to happen to Mrs. Jardine's suddenly orphaned grandchildren, who she takes in and sees only then for the first time. At the end of this section, the Jardines move to another estate in France.

The book then jumps about five years, to return to England after WWI: the family had been stuck there during the war. When they return, granddaughter Maisie (who had become a particular friend of Rebecca's in the first instance) picks up the story and continues filling in the now teenage Rebecca on the rest of their family history, and the sudden return of her mother whom they'd thought dead.

There was much drama and angst and innocence destroyed in this book. Rebecca, as a young girl hearing all these things that she doesn't quite understand, gives us the story as she'd heard it, without any of her own inferences to cloud our judgement of the situation. Mrs. Jardine is a fright, an utterly self-absorbed woman slavishly attached to the idea of herself as a femme fatale; she can't even stand her own daughter, who is as beautiful as she is. Even as an "elderly" woman she needs to know that every male in her vicinity prefers her over all other women, even if the man and other woman in question are both twenty years younger. It was quite a portrait of an unusual personality.

The flaws in the book, for me, were simply that there was a lot of "telling". Everyone seemed to want to go over details of their past and all their intimate feelings in Rebecca's hearing. I felt as if Rebecca was simply a static receiver, nothing happening in her own life to speak of, simply present as a conduit for the Jardine family's tales. However, Lehmann wrote a later novel, A Sea Grape Tree, which follows Rebecca after a failed love affair as an adult (a favourite theme of Lehmann's) so perhaps I'll read that one for more about Rebecca -- although it was written after Lehmann's conversion to spiritualism so I'll have to see if it is readable.

Nonetheless, Virago Reading Week has been a lot of fun, and an encouragement to pick up a few of the volumes on my shelf which were awaiting a read. Check out Carolyn & Rachel's review round-ups to find a large number of Virago readers talking about what they've read...it may encourage you to pick up one that you haven't read yet.

A bonus: something I found while looking around at information on Rosamond Lehmann online.... a look at Lehmann's views of her own writing and her life in a very interesting 1985 Paris Review interview discussing various aspects of her life story in relation to her works.
Posted by Melwyk at 1/30/2011 07:58:00 pm